The Oconee County Board of Commissioners tonight agreed to give preliminary consideration at its regular meeting on May 5 to a resolution that would state the county’s preference that future mitigation of damage to streams and wetlands in the county be carried out in the county.

A draft resolution for the county to review was presented to the Board by Katie Sheehan, a staff attorney at the River Basin Center in the Eugene P. Odum School of Ecology at the University of Georgia. 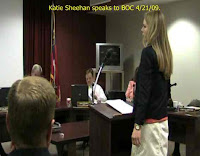 Under current federal law, a developer wishing to destroy streams or wetlands that fall under the jurisdiction of the federal government, as most streams and wetlands do, must obtain a permit from the United States Army Corps of Engineers.

When the Corps grants a permit, it requires the recipient to restore wetlands and streams to "mitigate" the damage being permitted by the Corps.

In my comments to the Board I said I contacted the River Basin Center and Sheehan after I learned about mitigation required by the Corps for the Epps Bridge Centre shopping mall on Epps Bridge Parkway.

The Corps granted developer Frank Bishop of Atlanta a permit to pipe and fill about a half mile of flowing streams and wetlands on the 63 acre site and to mitigate that damage on a stream in Greene County.

I told the Board that the rules had been changed since Bishop was granted his permit and that two mitigation banks in Oconee County now are in development–one on tributaries to the Apalachee River and the other on Rose Creek in the southern part of the county–that did not exist when Bishop made his application.

In addition, the Corps has designated the Georgia Environmental Policy Institute's Georgia Wetlands Trust Fund as an organization that can receive monies to use for preservation and restoration projects in Oconee County in lieu of mitigation. This option was not available to Bishop.

The resolution drafted by Sheehan acknowledges the changes in Corps procedures as well as the emergence of the three options.

The three-page resolution states "wetlands outside of Oconee County rarely, if ever, provide the level of values and services to Oconee County residents as those found in Oconee County" and notes that "an explicit goal of the Oconee County Comprehensive Plan is to ensure that the county’s natural resources are protected."

The meeting tonight was for setting the agenda for the May 5 meeting. Public comment at agenda setting meetings follows actual reading of the agenda, so both Sheehan and I were asking the Board to modify the agenda just approved.

Chairman Melvin Davis thanked Sheehan for her comments but did not respond to the request that the item be placed on the May 5 agenda.

Commission Chuck Horton said he thought the May 5 agenda should include at least a preliminary discussion of the proposed resolution. Commissioner Margaret Hale agreed, and Commissioners John Daniell and Jim Luke said they were comfortable with that decision.

Davis asked Commission Clerk Gina Lindsey to amend the agenda to include the item.