All Citizens Invited to Ad Hoc Board


The Oconee County Board of Commissioners is scheduled to give first reading on Sept. 28 to an ethics ordinance, revised since it was first proposed back in April to decrease the influence of the BOC on appointment of an Ad Hoc Board of Ethics to hear ethics complaints against commissioners.


The ordinance sets forth general ethical standards for county commissioners and specifies behaviors that are prohibited in 19 separate categories.


The ordinance stipulates that commissioners shall not have an interest in any contracts or transactions affected by their actions, attempt to influence a county officer making country purchases, withhold information from county boards or departments, or make unauthorized use of county property.


Any commissioner with an interest in any proposed ordinance, resolution or other action before the board of commissioners is required to immediately disclose publicly the nature and extent of the interest. 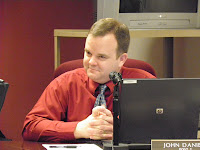 Commissioners found in violation of the ethics ordinance could receive a warning, censure or reprimand, be made to make repayment to the county for any unjust enrichment, be asked to resign and be referred to criminal authorities for prosecution.


The proposed ordinance states that anyone can initiate action against a commissioner by submitting a written complaint to the county clerk.


Each complain will be reviewed initially by the county attorney to determine if it involves a commissioner.


Complaints involving a commissioner are to be immediately forwarded to a Special Master, an attorney to be appointed by the BOC once the ordinance has passed.


Complaints then move to an Ad Hoc Board of Ethics, which is appointed when a complaint that is filed is considered by the Master to have merit.


All of these provisions are unchanged from the draft ordinance made public back in April.


What is changed is the composition of the Ad Hoc Board of Ethics.


In the ordinance now before the Commission, the Ad Hoc Board is created by the Special Master, the Oconee County Probate Judge and the Oconee County Chief magistrate after soliciting applications and recommendations from the citizens of the county.


Given that the Special Master was an appointment of the BOC, the BOC retained considerable control over composition of the Ad Hoc Board of Ethics. The revised ordinance dilutes that influence somewhat. The probate judge is an elected official. The magistrate court judge is appointed in Oconee County by the BOC.


Other changes in the ordinance proposed back in April cleaned up the language and corrected a numbering problem.


Commissioner John Daniell (above) spearheaded the efforts to create the ethics ordinance, which was drafted by County Attorney Daniel Haygood and modeled at least in part on a Draft Model Ethics Ordinance for Counties prepared by the Association County Commissioners of Georgia.


Ethics had been an issue in the 2008 campaign in which Daniell defeated long-time Commissioner Don Norris.


Norris, a member of the Board of Directors of North Georgia Bank, had been criticized for not recusing himself from votes involving developers doing business with the bank.


The ordinance before the BOC on Sept. 28 would give citizens a mechanism for making complaints of the sort voiced against Norris and for having the complaint considered by citizens in the county.