Though Oconee County administrators have been working on the 2011 fiscal year budget since early this year and the Board of Commissioners has been holding budget meetings since the middle of April and will hold another on Tuesday night, citizens will get their first chance to comment on the budget on May 25.

The Board of Commissioners is scheduled to hold a public hearing on the 2011 budget, which takes effect on July 1, before its agenda-setting meeting on May 25 and to take final action after the second public hearing at the regular meeting on June 1.

The first public hearing is scheduled to begin at 6:30 p.m. at the courthouse in Watkinsville. The second hearing will be incorporated into the regular meeting a week later, which begins at 7 p.m., also at the courthouse.

The commissioners met with department heads on April 12, 13 and 14 to review their budget requests and worked to resolve the imbalance between requests and projected available revenue on May 5. They will return to that topic at a special called meeting that will begin at 5:30 p.m. Tuesday in the courthouse. 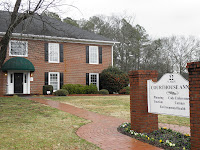 All the meeting involving the commissioners have been open to the public, and all but the full-day meeting on the 13th are available for viewing on the county’s Vimeo site. To this point, however, no opportunity for citizen comment has been provided.

County Finance Director Jeff Benko said at the May 5 meeting that he is projecting that the county will have $19.6 million available in general fund revenue for the upcoming fiscal year. Department heads and elected officials such as the sheriff had requested $22 million in spending, he said.

To make the current budget balance, the county moved $644,000 from its reserve fund, Benko said on May 5.

Benko’s revenue projections of $19.6 million for the 2011 fiscal year are about $1.5 million lower than what he projected for the current fiscal year. The current budget was based on $21.1 million in revenue, plus the transfer of the $0.6 million from the surplus.

Benko told me in an email message he sent me on May 7 that he is projecting $4.3 million in sales tax revenue for the general fund, or about the same as a year earlier. 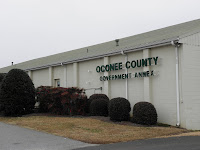 The county expects to pick up $6.4 million in revenue from administrative fees of various sorts, such as from code enforcement, the jail and the parks and recreation department. That figure was $7 million a year earlier.

The general fund is only 57 percent of the total $34.5 million budget for the county for the current fiscal year. Projects funded by the Special Purpose Local Option Sales Tax as well as the operation of the Utility Department are outside the general fund.

The Utility Department has proposed a budget of $6.4 million for Fiscal Year 2011, up from $5.6 million in the current fiscal year. The proposed budget includes increases of 15 percent in base water rates and either a 16 or an 18 percent increase in base sewer rates, depending on location in the county.

The Commissioners did not discuss the Utility Department budget or water and sewer rate increases at the meeting on May 5, though they did tell Utility Department Director Chris Thomas at the April 14 meeting that they wanted him to consider options to the increases in the base rates he proposed.

The action taken by the Board at the May 5 meeting, however, makes it unlikely the budget will be $19.6 million. The Board spent three hours and 15 minutes whittling away at requests and tapping small pockets of reserves before tentatively agreeing to take $1.14 million more from the fund balance.

That decision, which will be reviewed on Tuesday night, would bring the 2011 general fund budget to $20.7 million, or more than a million less than the budget for the current fiscal year.

Much of the discussion at the May 5 meeting focused on how much money was going to be taken from the fund balance, which is the amount of money the county has built up from taxes collected but not spent in years past.

The difference is the result of the transfer of the $0.6 million to balance the current budget.

Benko said that the guideline he works with for the size of the fund balance recommends that the reserve should be 25 percent of the general fund budget. So he said he considered $5.3 million–or 25 percent of a $21.2 million budget--to be untouchable.

That would seem to leave $5 million in reserve, but the county has committed $5 million to the state for the cost for right of way acquisition for the widening of Mars Hill road.

The state has told the county it will reimburse that $5 million, but the county does not control the schedule of such reimbursements.

Benko said he is comfortable saying the Board could spend $1 million from the surplus to balance the budget on the view that the county will not need to spend more than $4 million for additional right of way purchases.

Benko proposed to the Board a list of potential reductions in expenditures to close the $2.4 gap between projected revenue and projected expenses.

First to go was $175,000 the county would have to pay to match employee contributions to their 401K retirement funds. The match was suspended for the upcoming fiscal year.

The Board decided not to give the Oconee Industrial Development Authority $125,000 for infrastructure investment in the proposed Gateway Business Park on SR 316 near the Barrow County line and to postpone $114,500 in capital requests for the Civic Center.

The coroner’s request for a new car was scratched. The library was told it cannot hire a consultant to consider a new library location.

The Bogart trash and recycling collection site will be closed, and others will operate with restricted hours.

The Parks and Recreation Department was told to cut back on hours of operation to save $15,000, to increase user fees even more than originally proposed, and that it should not spend money set aside for replacement equipment in the exercise room at the Community Center at Veterans Park.

County Clerk Gina Lindsey won’t get a $800 computer requested for use at commission meetings.

Commissioner Jim Luke said the four commissioners will give up 10 percent of their salaries, amounting to a total of $8,800.

Chairman Melvin Davis said he would be willing to join the four, but the 10 percent reduction in his $92,275 salary was not included in the cuts.

Davis did remind the other four commissioners that he alone had forgone a $4,394 salary increase he was entitled to at the beginning of calendar year 2009 as a result of being reelected.

The Board spent most of the time at the May 5 meeting discussing what to do with the $167,000 increase in health insurance costs for county employees.

One option was to require all county employees to take four furlough days, which would cut $160,000 from county spending. If that were done, the county would cover the health benefits increase.

In the end, the Board voted 3-1 not to cover the health benefit cost increases, passing all those costs back to the employees. Commissioner Jim Luke voted against that decision, saying he preferred furloughs.

The Board also discussed at length moving county offices that are now in the Courthouse Annex, across the street from the courthouse, to the Oconee County Government Annex, located on SR 15 south of downtown Watkinsville.

The county rents the Courthouse Annex and pays for utilities, and it has a lease through the end of this calendar year. In addition, the United States Department of Agriculture Farm Service Agency and other organizations currently rent space in the Government Annex and will have to be told to move.

The county agreed on Feb. 2 to spend $170,000 to renovate the Government Annex, using SPLOST funds. But those plans would have to be scrapped as the county explores how to best accommodate the Planning Department, Code Enforcement and others offices now in the Courthouse Annex.

Commission Luke said the savings of $41,675 projected by Benko for the move was unrealistic and objected to the proposal. In the end, the Board decided to go forward with the move but to only list a savings of $20,000 in the budget.

Even with all the cuts, the Board could not close the $2.4 million gap.

Two hours and 45 minutes into the meeting--and before the Board reached its decision on insurance versus furloughs–-Benko said he could accept dipping $200,000 deeper into the reserve in the hopes that final expenditures for the county by the end of June of this year will be less than actually budgeted.

In the end, the Board decided to take $1.14 from the reserves to close the budget gap.

The possibility of raising taxes to close the gap never came up at the May 5 meeting.

Chairman Davis had floated that idea in his column in the April 29 issue of The Oconee Enterprise, which also appears on the county web site.

“I do not believe this board desires to raise the millage rate during these difficult economic times, even though over the past several years the county millage rate has dropped from 8.23 mils to 6.686 mils,” Davis wrote.

Given that property values on average now have declined, producing for many a cut in taxes, the Board could have increased the millage rate to hold steady the amount of revenue from property taxes.

Neither Davis nor any of the other commissioners brought up that possibility at the May 5 meeting.
Posted by Lee Becker at 9:09 PM 1 comment: