Oconee County Chair Will Not Mount Legal Challenge to Ordinance

Wants to Table Ordinance Instead

Oconee County Board of Commissioners Chairman Melvin Davis does not intend to mount a legal challenge to the ordinance being considered by the full board that would reduce his power and increase the power of the other members of the board, though he said he has considered it and sought legal advice about the possibility.
He said he has not thought about resigning should the ordinance be passed, but "there’s always options."
Davis said passage of the ordinance "would be a factor that would cause me to make a decision on whether I would or would not seek reelection" when his terms expires in three years.
Davis said he "will probably end up asking the board" to table the ordinance before it and instead launch a larger study of what kinds of changes should be made in the governmental structure of the county.
The chairman, now in his third four-year term, said the county has changed a lot in recent years, but the structure of government has remained the same.
He said one thing that should be considered is creation of districts for the members of the commission. At present, the chairman and the four commission members run at large.
Davis made these comments in a 15-minute interview with me this morning in his office at the courthouse. I had asked for the interview in an email 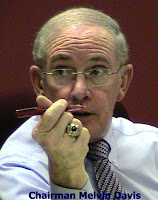 message I sent him on Friday night because I realized he had not been asked these questions by journalists.
I was interested in his answer and thought others might be as well.
Davis said he had been asked before in recent weeks by at least one citizen if he intended to challenge through the courts the ordinance.
"No, I would not do that because of primarily the cost involved," he said in response to my question. "I don’t think that is fair to the Oconee County citizens."
Davis said he has sought legal advice from someone other than County Attorney Daniel Haygood, who drafted the ordinance before the commission after a series of meetings going back to last September. Davis said he is still waiting on the response from one person he has consulted but wanted to keep "private" the identity of his adviser or advisers.
Davis said he has not had conversations with any others who may be interested in challenging the ordinance.
"I think the public needs an opportunity to determine what form of government we have," Davis said. "That’s the public’s decision."
Davis said the public should decide what kinds of executive officer it wants as well as how the commissioners are elected.
"They now run county wide," he said. "Should they still run countywide, or represent a certain district...These are all options that I think the public needs to take a look at."
Neither Davis nor any of the other commissioners sought public comment as the current ordinance was drafted. At the meetings held for the purpose, the public was told specifically it would not be given a chance to speak.
Nine citizens did speak at the first reading of the proposed ordinance on July 7. Public comment is scheduled to be allowed again at the board’s agenda-setting meeting on July 28. Final action on the ordinance is scheduled for the regular meeting of the BOC on Aug. 4.

The proposed ordinance, available with related documents on the county web site, has eight sections.
Section 1 names the ordinance as the "Oconee County Organization Policy."
Section 2 adopts an organizational chart for the county that is radically different from the one currently in place.
The ordinance specifies that the county attorney, the county clerk, the administrative officer and the finance director all report to the full commission, which includes the chairman, and that all department heads report to the administrative officer.
At present, the administrative officer and the finance director report only to the chairman of the board. Department heads also report to Davis.
Sections 3 and Section 4 define the responsibilities of the administrative officer and the finance director respectively.
Section 5 spells out duties of the chairperson of the Board of Commissioners and states that "It shall be the policy of the Board that the Chairperson shall have particular leadership and emphasis" in six listed areas.
The specified areas are coordination of intergovernmental activities, economic development, public relations, development of policies related to future needs of the county, evaluation of county services, and review of reports of the administrative officer and finance director and of staff activities.
If these are the only activities of the chairman of the board, the chairmanship would be a very different position than at present, since all activities of the county currently flow through the office of Chairman Davis.
Section 6 specifies a budget process that involves the commissioners explicitly in the deliberations and creation of the budget. In the past, the budget has been submitted to the commission by the chairman.
Section 7 states that department heads can be hired only with the approval of the board, upon the recommendation of the chairman, the administrative officer and the human resources director. At present the chairman hires and fires department heads.
Section 8 deals with meetings of the board and states explicitly that commissioners "have the right to have a matter placed on the agenda." At present, Davis controls the agenda.
Davis today said, in effect, he was accepting that the board has the right to make these changes.
The type of county government is not spelled out in the Georgia Constitution, but rather in what is called local enabling legislation. Each county asks the legislature to pass laws setting up the type of county government it wants.
Since each county has its own enabling legislation, a court would have to interpret the ordinance under consideration by the Board of Commissioners against the specific legislation for Oconee County.
The county commission system that Oconee County has was established in 1917. According to that legislation, the chairman "shall be the chief manager of the affairs of said county that are within the jurisdiction of said board of commissioners acting as its executive officer."
The legislation put the chairman in charge of making contracts and purchasing for the board and said the chairman "shall discharge all the duties of the board of commissioners during interim between the dates of the board's meetings."
The full commission, according to the 1917 enabling legislation, has responsibility "over all matters concerning county property, county taxes..., in establishing and changing ... election precincts, in examining and auditing and setting accounts of all offices having the care, management, correction, keeping and distribution of moneys belonging to the county or appropriated to its use and benefit, ... in establishing, altering and abolishing roads, bridges and ferries..."
The enabling legislation for Oconee County has been changed many times over the years, mostly to adjust the salaries of the chairman and the commissioners.
In 1919, the number of members of the board was increased from three to five. In 1975, the legislation created the current four "posts" plus the chairmanship, with candidates having to indicate which post they were seeking at the election. All posts cover the whole county.

In 1988, the duties of the chairman were greatly restricted.

They were: (1) serving as presiding officer at meeting of the Board, (2) stating questions coming before the board and announcing decisions, (3) voting in the case of a tie, (4) signing ordinances, (5) executing statements of indebtedness, (6) acting as ceremonial head of the county, (7) and exercising "other administrative duties that my be delegated to the chairman by the board of commissioners."

The chairman, in sum, serves as both the executive officer of the county and as chairman of the legislative body. The legislation does not say that the board defines the powers of the chairman, but only that it can delegate some of its own powers to the chairman.
County Attorney Haygood was asked at the July 7 meeting if he felt the ordinance was consistent with the enabling legislation. He said he would not have written it unless he did.
The board, rather than pass the ordinance, could change the enabling legislation, and that is what Davis advocated in his interview with me this morning.
He said the county might hold an election "to determine what the public desires to do." Such an election would be followed by "legislation to go to the general assembly" for approval.

Such a series of steps--coupled with a tabling of the current ordinance--certainly would do much to maintain the status quo. That is something the board is unlikely to entertain.

To listen to or download the full interview with Davis, go to my box.net site.
Posted by Lee Becker at 9:00 PM No comments: