Volunteer Winner a Local
The Georgia River Network today announced the winners of its 2010 River Celebration Awards, to be recognized Feb. 19 at the group’s sixth annual conference at the Jekyll Island Convention Center.

The winners are: the Coosa River Basin Initiative from Rome as the Watershed Group of the Year, Gordon Rogers of Albany as the River Conservationist of the Year, and I as the Volunteer of the Year.

To say I’m delighted and honored is truly an understatement.

The Georgia River Network is a statewide organization working to preserve clean water in the state. It’s offices are at 126 S. Milledge avenue in Athens.

Dana Skelton, director of administration and outreach for the network, made the announcement.

The Coosa River Basin Initiative was founded in 1992 and through its advocation, education, restoration and water monitoring programs has “helped improve water quality in the Coosa River Basin and helped citizens better understand water resource issues,” according to the news release by Skelton.

The news release said my contributions to the Oconee County area are twofold, citing the creation of Friends of Barber Creek in early 2006 and this blog, which it calls an important news source focusing on issues facing the county.

“It is not a stretch to say that Lee, who is both a professor of journalism and a 21st-century citizen journalist, has changed the landscape in Oconee County,” the release said.

I am president of Friends of Barber Creek, but each of the other four board members–Karen Kimbaris, Eleanor Cotton, Tim Price and Joe Block–certainly deserves a share of this award.

Jim Butler, a lawyer in Columbus, Paul Deloach, a business development manager in Andersonville, and Mark Woodall, a lobbyist for the Sierra club from Woodland, were winners of the Volunteer of the Year Award in 2009. They set up the Flint Riverkeeper.

The three 2010 award recipients will receive the recognition in a special ceremony starting at 6 p.m. on the first day of the two-day conference.

The conference will include discussions of current state legislative and policy issues, a history of and recent developments in the water wars between Alabama, Florida and Georgia, and an exploration of current environmental issues on the coast and discussion of what is being done by groups to address those issues.

My wife and I are looking forward to attending the conference. 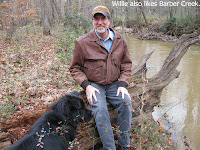