Board Gains, Chair Does Not

The Oconee County Board of Commissioners spent a little more than three hours tonight in a work session that ended in tentative agreement on an organizational chart that would greatly increase the power of the four commissioners and decrease the unchecked authority of Board Chairman Melvin Davis. 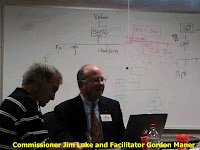 The board cancelled its meeting for tomorrow night and agreed to meet instead at 5:30 p.m. on May 19, again at the Community Center of Veterans Park, to flesh out the organizational chart by detailing the responsibilities of the chairman and the county administrative officer as well as of others on the chart.

The organizational chart that was tentatively accepted distinguished between the responsibilities of Davis as chairman of the Board of Commissioners and as chief executive officer of the county, but it assigns no responsibilities to Davis as CEO. The board agreed to spell those out at the meeting on May 19.

Davis’ acceptance of the proposed chart, largely crafted by the other four commissioners, is tentative based on learning the responsibilities of the chairman as CEO, he said.

The board would have to formally vote on a set of administrative rules to make the organizational chart a reality. The board stated as a goal putting such changes in place by July 1.

The board reached agreement after discussing for much of the evening alternative charts to describe the operation of the county.

At the suggestion of Harry Hayes of the Carl Vinson Institute of Government at the University of Georgia, the board tried to focus on changes that could be made without changing the enabling legislation for the county.

The conversation crossed the line at several points, however, with Commissioner Chuck Horton emphasizing that he wanted the chairman of the board to be required to vote. At present the chairman votes only in the case of a tie, as prescribed in the enabling legislation.

Commissioner John Daniell said he wanted the chairman to vote and also wanted to change how salaries for the chairman and the other four commissioners are set. The latter also is controlled by the enabling legislation for the county.

To change the enabling legislation, either Rep. Bob Smith or Sen. Bill Cowsert would have to introduce new legislation that would be passed by the state General Assembly. The two are under no obligation to introduce such legislation.

The meeting covered a lot of territory from an earlier session on Sept. 25, 2008. Complaints about the inadequacy of information filtering down to the commissioners were made forcefully by Commissioners Jim Luke, Margaret Hale and Horton.

Ten members of the public, including two reporters, sat in the back of the room for much of the discussion. Gordon Maner, also from the Carl Vinson Institute, served as facilitator for the meeting and said at the meeting’s outset that the public would not be allowed to participate in the discussion.

Horton said near the end of the meeting that the public should have a chance to voice its preference on administrative structure before a final decision is made by the board.
Posted by Lee Becker at 9:15 PM No comments: