Challenger and Incumbent for Superior Court in Oconee and Clarke Counties Differ on Accomplishments, Qualifications


Challenger Pamela Hendrix and incumbent David Sweat have very different views about what distinguishes one from the other, about what each would bring to the Superior Court were she elected or he re-elected, and their most significant accomplishments in the last 10 years.


In responding to a series of questions I posed, Hendrix repeatedly focuses on her gender and the need, in her view, for a woman to join what is now a three-judge court made up entirely of men.


Sweat focused on his experience and his accomplishments during the eight years he has served Oconee and Clarke counties as a Superior Court Judge for the Western Judicial District.


“I brought 23 years of courtroom and legal experience to the bench when the voters elected me in 2002,” Sweat said. “Now, I have nearly 8 years of experience doing this work. I have been recognized by members of the community and fellow judges as an effective judge and leader in trying to solve the problems facing our community.”


“The voters should select me because I have a proven record of experience and success,” Sweat, who is 55, said.


“Voters deserve some fresh, new ways of thinking from the bench and not just judges that are making a nice salary and marking their time until retirement,” Hendrix, 44, said.


Hendrix has mounted an aggressive campaign against Sweat. She has put up yard signs in both counties (downtown Watkinsville pictured) and run advertisements, some with a negative play on the incumbent’s name, pronounced just as it is written. She also has been assertive in interviews with reporters. 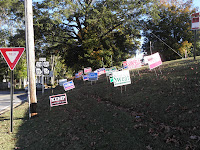 The incumbent has been restrained in his response, relying on his name recognition and focusing on his incumbency.


Sweat also has mailed to Oconee County voters an endorsement from Sheriff Scott Berry, who said that Judge Sweat is “the kind of judge that law enforcement needs on the bench.”


The Western Judicial Circuit, consisting of the two counties, is the western-most circuit of the Tenth Superior Court District of Georgia.


If those ratios hold this year, just fewer than 51,000 votes will be cast in the two counties, and about a quarter (26.7 percent) will come from Oconee County.


The Superior Court race is a late bloomer, since judges run without party endorsement or identification. Hendrix filed her paperwork to run against Judge Sweat only on July 15, or five days ahead of the party primaries for most of the candidates whose names will appear on the Nov. 2 ballot.


Early voting is now ended, and voters will have from 7 a.m. to 7 p.m. on Tuesday to cast their ballots at their polling places. Any voter confused about that venue or uncertain about her or his registration status can go to the My Voter Page of the Secretary of State web site for additional information.


On Oct. 21 I sent a list of 11 questions to Hendrix and Sweat, asking them to respond and indicating I would report the answers in Oconee County Observations.


I received the completed form from Hendrix on Oct. 25 and from Sweat on Oct. 28. The full responses are on the Oconee County Observations Box.net site. I formatted the responses to make them comparable but otherwise did not edit them in any way.


The questionnaire I sent to the candidates began by asking them to identify “the personal characteristics that make (or will make) you a good Superior Court Judge for the Western Judicial Circuit of Georgia?”


Hendrix said “I have a love for people, especially children, and a servant’s heart. I am very even-tempered and am often called a ‘peace maker.’ As a mother and self-employed attorney, I am a master multi-tasker and administrator. I am smart and my character is above reproach.”


Hendrix listed a number of professional skills that would make her a good Superior Court Judge, including those gained from “over 19 years of legal experience in diverse practice areas including real estate, general business, wills and probate, property tax appeals, family law and criminal defense.”


Sweat said that before he was elected in 2002 as a judge of the Superior Court he “had 23 years experience in private law practice, handling a broad variety of criminal and civil legal matters in all levels of state and federal courts...As a judge I have conducted hundreds of jury and non-jury trials and handled thousands of cases.”


Sweat gave a long list of professional accomplishments over the last 10 years, including that he established and now presides over a “Child Support Problem-Solving Court which is one of two model child support problem-solving courts for the State of Georgia. “


Hendrix listed a number of accomplishments as well, but she began by saying “What I am most proud of is giving birth to and raising mostly on my own (their Dad left when my two boys were just three and six years old) two well-adjusted children who are model students and well on their way to becoming hard-working, productive citizens.”


I asked the two candidates what they hoped to be able to point to in four years as their most significant accomplishments as Superior Court Judge. Hendrix listed several things, but ended by focusing on families.


“I would especially hope that the children in fractured family situations would feel I had really listened to them if they desired to speak,” she said.


Sweat, among other things, said he hopes he is able to say he expanded the Child Support Problem-Solving Court “to include many additional parents who are failing to support their children, to make them accountable and responsible and to enhance the economic well being of their children.”


I also asked the two candidates to identify the challenges and opportunities facing the Western Circuit of the Superior Court.


Sweat said the economic downturn has resulted in greater stress on families and individuals and that, in addition to programs he already has in place, he would want to work more with the governments of the two counties to address the increased stress from the downturn.


He said technologies offer some new opportunities for the court and he has already tried to seize these and other opportunities available.


Hendrix cited the heavy case load for the three judges as a challenge, indicating that “good case management is imperative.” She also said “It may be time to consider a Family Court in the Western Judicial Circuit.”


She said the University of Georgia Law School is an opportunity for the Clarke and Oconee Superior Court and said that second and third-year law students could help with legal clinics “to help reduce the backlog of cases.”


Sweat made no direct reference to Hendrix in his answers. He did point out that he has lived “in this community since 1976.” Hendrix moved to Oconee County from Morgan County three years ago.


Hendrix made several references to Sweat in her responses.


“I have never been a judge,” Hendrix said in one response, “but eight years ago neither had David Sweat. I know that I am at least as intelligent as he is, so if he learned the job so can I.”


Sweat had raised $29,277 in campaign contributions, according to his filing with the Ethics Commission. Though only required to list contributions by name if the amount was more than $100, he listed all contributions. The largest was for $2,000 from the law firm of Blasingame, Burch, Garrard and Ashley.


Sweat spent only a little more than $3,000, and a third of that was for yard signs. He listed $697 as postal expenses. That probably did not include the expenses for the mailing from Oconee County Sheriff Scott Berry.


I received my letter from Sheriff Berry in the middle of October. The letter of endorsement of Judge Sweat by Sheriff Berry was listed as paid for by the Committee to Re-Elect Judge David Sweat.


The return address for the mailing was David Sweat, 1140 Experiment Station road, Watkinsville, GA 30677. That is the Oconee County sheriff’s office and county jail.


I spoke with Sherilyn Streicker, the deputy executive secretary of the State Ethics Committee, on Oct. 18 and asked if there was any provision of state law that would keep the sheriff from using the return address of a county facility for a paid political mailing.


Ms. Streicker, who is an attorney, said in her view the use of the return address alone does not constitute a contribution to a campaign. Use of county personnel to mail the envelopes would be a contribution and would be prohibited, she said.


Sheriff Berry indicated in his letter that he also had written to citizens four years ago endorsing Judge Sweat.


Voting in Oconee County had been slow during the first weeks of early voting, which began on Sept. 20. As of Oct. 22, only 1,804 persons had voted.


Until this week, voting only was possible at the Board of Elections and Registration office next to the courthouse in Watkinsville. The Civic Center on Hog Mountain road also was open for voting this week.