More than 60 people showed up at the Civic Center tonight to voice support for preservation of land around the Elder Mill Bridge and for a mitigation resolution before the county. They also expressed concerns about a wide range of issues from taxes to a need for community gardens.

The five commissioners showed little to no support for creation of a county park around the covered bridge on Elder road in the southeastern part of the county, though they did support purchasing and preserving Elder Mill, just down Rose Creek from the bridge, should that come on the market. 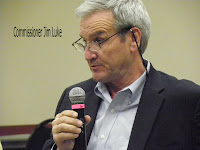 Board members were more receptive to the mitigation resolution that would put the county on record with the U.S. Army Corps of Engineers as favoring mitigation in the county or upstream from the county when the Corps issues permits for destruction of streams and wetlands in the county.

The Board members also expressed reservations about the resolution, with Chairman Melvin Davis saying he is worried about “unintended consequences” for development and Commissioner John Daniell saying he was not sure the resolution goes far enough.

More than 20 persons spoke at the session, and seven spoke in favor of the mitigation resolution after I asked each of the commissioners to state where she or he preferred that mitigation be done when county streams are damaged.

All five of the commissioners said they preferred restoration upstream or in the county, consistent with the language of the resolution itself.

I introduced the mitigation resolution to the county last spring, but the board has taken no action on it.

Russ Page, long-time advocate for a park at the Elder Mill Bridge, spoke first and asked the members if they were willing to take action to preserve the area.

Commissioner Jim Luke said the proposal for the park back in 2007 “scared me to death” because of its scope, and Chairman Davis once again said the county simply did not have money for the project.

Davis acknowledged, however, that the county spent nearly $1 million on park improvements elsewhere in the county in the last five years.

Despite the lack of funds, Luke said, if the mill comes on the market, “we’ll find a way to protect the mill.”

Pat Priest suggested the county consider developing a community garden, and Commissioner Luke said he felt there was land available for that purpose in the county if someone came forward with a specific plan.

Stuart Cofer, owner of Cofer’s Home and Garden Store in Athens, said he would donate seeds for the project.

Bill Mayberry, active in anti-tax initiatives in the county, asked if the county would work more closely with the school board to reduce the tax burden in the county. The commissioners indicated they already were doing a number of things in this regard and were willing to do more.

The session lasted two hours, and many stayed for about a half hour afterwards to talk individually with the commissioners. The commissioners also engaged in informal conversation in the half hour before the formal session.

This was the second town-hall style meeting held by the commissioners in recent months. About 40 persons attended the first back in October.

I recorded the session and uploaded that recording to my Vimeo site.
Posted by Lee Becker at 11:13 PM 1 comment: