The Board of Directors of Oconee County’s Farmers Market, ready to launch the 2011 season, chose a new president tonight, decided to meet with vendors next month, and agreed to move forward with an application for grant money to hire a full-time manager.


Last year’s market launched on May 8, and the Board is considering an even earlier start date for this year, if vendors indicate at the meeting in February that they will have things to sell in late April or early May.


Last year (below) the market, held on Saturdays, remained open until the end of October. 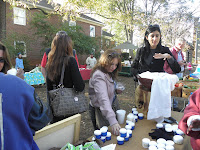 Russ Page, one of the original organizers of the Farmers Market, told the Board that Watkinsville has agreed to close First Street behind Eagle Tavern to allow new vendors to join the market.


The Board had discussed moving out of Watkinsville because the market has expanded and the space available behind the Tavern no longer is adequate.


The market launched in 2004 in the front yard of Eagle Tavern but moved to the rear of the Tavern in 2009 to allow for more vendors and because the county sodded the grass in front of the historic tavern.


Page was selected as president of the Board of Directors at the meeting tonight, replacing Karl Berg, who has decided to step away from his work on the Market. Cindy Norris was selected to be vice president, and Debbie Beese and Jamie Swedberg were selected again as treasurer and secretary, respectively.


Other members of the Board are Amy Shane, Tim Walker and I. The Board did not have an official vice president before the meeting tonight.


Beese told the Board , meeting at her house outside Watkinsville, that the organization has grown enough that “we need a full-time market manager.”


The group agreed to make an application to the U.S. Department of Agriculture for grant funds for that purpose. If successful, Oconee Farmers Market would hire someone for six or seven months to take on that task.


In the meantime, the Board members agreed to spread responsibilities of a manager among themselves.


The Board also agreed to move forward with new signage for the market and to explore various promotional and marketing strategies.


Included is the possibility of T-shirts and tote bags that would carry a marketing message for the market.


The Farmers Market is a nonprofit organization, and vendors pay 5 percent of their sales to support its work.