If a crowd shows up at the Oconee County town-hall style meeting with members of the Board of Commissioners at 7 p.m. on Tuesday night at the Civic Center, it probably will be because of word-of-mouth and informal notification about the meeting.

The county did post a notice of the meeting on its website and on the bulletin board at the courthouse on Feb. 3, the same day it sent notices to The Oconee Enterprise, The Oconee Leader and the Athens Banner-Herald.

The county did not take out any advertisements in the three papers.

Neither of the two weeklies included the meeting it its calendar of upcoming events.


The Banner-Herald ran two very short stories. The first was two paragraphs long and was the second item in the Around Oconee cluster of short reports on page two of the Oconee Living insert to the paper on Feb. 10. A four-paragraph story appears on page B2 of today’s paper.

The Leader ran a 10-paragraph-long story on page 6 of its Feb. 11 edition.
Oconee County Clerk Gina Lindsey sent me an e-mail message on Friday morning confirming the county’s efforts to promote the meeting.

A little after 3 p.m. on Friday she sent another announcement of the meeting via e-mail to a list she maintains of media and interested citizens. Today’s Banner-Herald item was a rewrite of the announcement in that second mailing.


Wendell Dawson sent out a message to his listserv today and directed readers to his web site, on which he urged citizens to “Attend and speak up at Oconee Town Hall meeting on Tuesday, February 16, 2010 & take action to Lower Your Property Taxes.”
Dan Matthews also posted a note on his blog this morning saying that “I think it is very important that each and every one of us attend this town hall forum 7 p.m. Tuesday" and encouraged readers "to ask the Oconee County Board of Commissioners any question you want.”

The county held its first such meeting with citizens on Oct. 20, 2009, and about 40 people turned out for an hour-and-a-half-long exchange.


Neither of the weeklies made any reference to that town-hall meeting in the calendar listing in the Oct. 15 editions, and the county did not run advertisements.
According to a second document Lindsey sent out with her Friday afternoon email, Alan Theriault, administrative officer for the county, again will serve as moderator for the session.

Melvin Davis, chairman of the Board of Commissioners, is scheduled to begin the session with a “call to order and welcome” at 7 p.m.


The session is schedule to last two hours, and commissioners have promised to be available for informal conversation for a half hour before the call to order. The Civic Center is at 2661 Hog Mountain road, west of Butler’s Crossing and near the Oconee High School.
The four commissioners initiated the town-hall meetings as a way of improving communication with the citizenry, and Commissioner John Daniell was the one to first announce this meeting at the BOC agenda-setting meeting on Jan. 26, giving the precise time, date and venue.

Chairman Davis was a little flustered, and he responded: “It is at 7. I believe that is correct. Thanks. John.” Then we went immediately to the next time on the agenda.

Daniell also took the initiative in re-announcing the session a week later at the regular meeting on Feb. 2. Again, Davis’ response was brief.

I reported on the first announcement in my report on the Jan. 26 meeting of the BOC, but the Enterprise did not mention it in three stories it ran on Jan. 28 about issues covered at that meeting.


The Banner-Herald ran a story on the meeting on Jan. 29, and it also did not mention the town-hall meeting.
The Leader does not cover BOC meetings and rarely writes about governmental issues in the county.

I also reported on the town hall meeting in my story on the Feb. 2 posting, but the Enterprise did not.

The Enterprise in its Feb. 11 edition did include an oblique reference to the town hall meeting in a story on the bottom of page A5 about a Greenways Master Plan discussion scheduled for 6 p.m. Tuesday at the community center in Veterans Park.

In the middle of the second paragraph, the story includes a direct quote, “A Commissioners’ Town Hall meeting is scheduled for 7 p.m. at the Civic Center also on Feb. 16,” but it gives no idea who was being quoted of why. 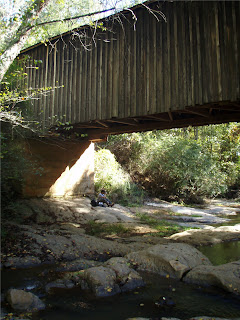 The Banner-Herald didn’t have a reporter at the Feb. 2 meeting, and it ran a short report on the meeting on the front page of the Oconee Living section on Feb. 10. It attributed the information to the circulated draft minutes from the county and did not mention the town-hall meeting in that story.
The Leader, once again, did not cover the meeting.

It seems likely that the county’s unwillingness to move forward with plans for creation of a park and protection of land around the history Elder Mill Bridge (above) will be a topic raised at the meeting on Tuesday.

The Enterprise gave some attention to this issue in its story about the Jan. 26 BOC meeting that appeared on page A12 of the Jan. 28 edition. The story was disjointed and hard to follow, but it did indicate in a nuetral way that two citizens, Russ Page and Robert Wyatt, expressed their disappointment that the county had not acted.

The paper gave further uncharacteristic coverage to someone who questioned the county when, in the Main Street column by Publisher Vinnie Williams on Feb. 4, it commented favorably on the color of the sweater Wyatt wore at the meeting. “Liked the daffodil-colored sweater that Dr. Bob Wyatt wore,” Williams wrote.

The future of the courthouse is likely to be another topic that will come up Tuesday.

The Citizen Advisory Committee for Land Use and Transportation Planning has been discussing this issue, and Dawson, a former BOC chairman, suggested in his blog posting today that this should be discussed.

I plan to bring up the resolution I introduced–but that the BOC has so far refused to discuss–that would put the county on record with the U.S. Army Corps of Engineers as favoring local stream and wetlands restoration when the Corps grants a permit for stream and wetland destruction in the county.

The county’s slowness in moving forward on the promised widening of Daniells Bridge road was raised at the last town hall meeting and might come up again Tuesday.

The county is just starting its budget process for the 2010-2011 fiscal year, and citizens might have questions and comments about county priorities.

An issues that is left over from last year is how the county cut back on the budget of the Keep Oconee County Beautiful Commission. That could come up again on Tuesday night.

Franklin Shumate suggested at the time he planned to make that an issue in the upcoming elections.

The terms of commissioners Daniell and Margaret Hale expire at end this year, and filing for candidates who wish to run as a party nominee begins on April 26 and ends at noon on April 30.

Independents file from June 28 to noon on July 2.

It is possible there will be hints of the election on Tuesday night.

NOTE: In the original version of this posting, I did not mention the story in the Feb. 11 issue of the Leader. Anna Dolianitis, a staff writer for the paper, sent me an email on Feb. 17 pointing out the error.

"While you were correct in that we did not run anything in our weekly calendar, we did print a story about it on Page 6 of our Feb. 11 issue (it is in a box near the middle of the page)," she wrote. "Since your post talked about how little publicity was given to the meeting, I thought it was worth mentioning that The Leader article about it showed up in 92 percent of Oconee mailboxes last Thursday."

She is correct. I somehow missed the story, and I apologize for the error.
Posted by Lee Becker at 8:33 PM No comments: