Oconee County Had a Conceptual Plan for Elder Mill Park

What Could Have Been
Some Oconee County leaders envisioned a park around the historic Elder Mill Covered Bridge on Elder Mill road in the southeastern part of the county back in 2007 that included hiking and equestrian trails, a museum, a nature center and an interpretation center including Elder Mill itself. 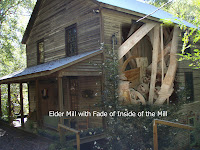 John Gentry, director of the Oconee County Parks and Recreation Department, sent me an email message on Nov. 21, 2007, indicating that he was in discussion with Dr. Charles Morgan, owner of the mill, about the county’s possible purchase of the mill.

“The mill is the key to success with the BOC (Board of Commissioners),” Gentry wrote me.

A conceptual plan for the Elder Mill Park was drawn up by Williams and Associates, a local land planning firm, on June 13, 2007.

The north entrance to the park was on SR 15 at Elder road, and the south entrance was at the intersection of Elder and Saxon roads.

The park also incorporated the W. Joe Elder Cemetery, near the bridge.

The park museum and information center were to be housed at the home of Al Cuming, who lived at the historic covered bridge and was its protector and advocate. He allowed access across his property to the shoals just downstream of the bridge.

For reasons that have never been publicly divulged, the county never moved on the plan for the park, and all of the land remains in private hands.

The Cuming home is under contract to be sold, with closing expected later this week. Cuming no longer lives there.

I had spoken with and sent email to Gentry as the discussions of the park progressed back in 2007.

Gentry, who is now on leave serving in Afghanistan, never got back to me about the plans for the park after that Nov. 21 message.

The county owns the bridge, which spans Rose Creek, and it has a scenic preservation overlay district covering some of the land that was to serve as the core of the park, including the land where the Cuming home and the mill are located.

The county zoning code says the preservation district “is comprised of land which in the best interest of the citizens of Oconee County should remain in a natural state as nearly as possible.”

The BOC discussed creating a park that would include the bridge and at least some surrounding property in a closed-door session on Sept. 4, 2007. No details of the discussion, which was in executive session, have been released to the public.

Even the Williams and Associates conceptual plan was not widely circulated.

At that Sept. 4 meeting, the BOC voted to continue to pursue a grant from the Georgia Land Conservation Program to help create the park, but the BOC refused to allocate any funds to support the application.

The 99-foot-long bridge was moved to its present location in 1924. The bridge is made entirely of wood, and its planks are held together with wooden pegs.

The grist mill, just downstream from the bridge, was built about 1900 and stopped operating in 1941, according to the marker at the bridge. It contains many of the original inner workings of the mill.

Plans were to use the money for amenities in other county parks, and Gentry said that committing the funds to the Elder Mill Park would delay purchasing some of these items.

“My recommendation to you first and foremost is to fully support the conceptual plan” for the park, Gentry wrote.

It never happened.
Posted by Lee Becker at 9:49 PM No comments: