One Mystery Solved
Trader Joe’s is scheduled to open its first Georgia store outside the metro-Atlanta area on Oct. 29 in a 12,100 square-foot storefront in one of three buildings that make up the Markets at Epps Bridge, 1850 Epps Bridge parkway.


Traders Joe’s will be in Building C in the complex, which is behind Building A, which houses the Five Points Deli, and Building B, where NewBalance and Fox’s Pizza are located. 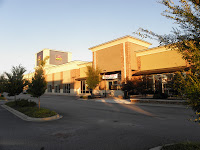 According to the application for sale of beer and wine that Trader Joe’s filed with Oconee County Clerk Gina Lindsey on Aug. 30, the sales area for the new store will occupy 9,352 square feet of the leased space, with storage taking up most of the rest.


The total square footage for Trader Joe’s at 12,110 compares with the 55,696 square feet occupied by the nearby Kroger grocery.
The diagram for the store submitted with the beer and wine application shows a store with four and a half shopping rows offset slightly and two separate produce rows.


According to the beer and wine license application, no one connected with the business has been convicted of a violation of any state, federal or local alcohol laws in the last 10 years.


When Phil Wofford came before the Oconee County Board of Commissioners on Sept. 28 to answer any questions about his application for the license, it was something of a lovefest.


“The reception has been wonderful,” Wofford said. “We feel loved.”


Wofford also said “if there is anything we can do for you, please let us know.”


The offer apparently only extended to Oconee County officials.


On Oct. 1, the day after the Athens Banner-Herald reported that the store would open on Oct. 29, I called Alison Mochizuki, listed in the Banner-Herald as the director of national public relations for Trader Joe’s and the source of the information in the story on the store’s opening date.


When I got an answering machine, I left a message asking Mochizuki to call me. I also called the main switchboard and was told that Mochizuki is the public relations department for the company and that she was the only one who could answer any questions I had.


I found a press release from earlier this year online that listed Mochizuki’s email address, and I sent her an email as well, asking her to call me.


I next called the number in the alcohol license application given for Wofford and also left a message.


By Monday morning, I had heard nothing from Mochizuki or Wofford, so I started calling again , leaving repeated messages. I also sent another email to Mochizuki.


Finally, on Monday afternoon, Mochizuki called me back, but I was in a meeting and could not take the call. I returned that call and left several more messages that afternoon.


On Tuesday I started over with both Mochizuki and Wofford. Mochizuki called me back about noon yesterday.


Mochizuki confirmed the opening date, told me the opening time, and then asked me to tell her “again” which media organization I represented. I told her I was a citizen who did a blog, and she said I had to talk with Customer Service rather than her.


Mochizuki then asked that I not quote her by name. I told her I would not agree to that.


She confirmed that the Oconee County store will be the first for Trader Joe’s in Georgia and outside Atlanta, where the company operates six stores. She also told me that the normal business hours would be from 8 a.m. to 9 p.m. daily.


I asked her if the store would be localized in any way, and she said there would be paintings at the front of the story that were local.


I next called Customer Service, and someone named Amy answered. She would not give her last name.


She told me she could not confirm the opening date of the store other than that it would be by the end of the year. She said the opening would be posted on the Trader Joe’s web site when it was finalized.


I asked her if the store would be any different from the ones in Atlanta, and she said the stores were decorated locally. To whom the store makes donations is determined locally, she said.


She said there would be no local product differentiation, though the stores do vary somewhat by region.


The story did mention that the store’s employees dress in Hawaiian shirts.


Wofford was wearing a green, white and black print shirt with a complex design when he appeared before the BOC.


I made a mistake in an earlier version of this report. I said that the Banner-Herald reported the opening date to be Sept. 29. It did not. The paper had the opening date right. I called Trader Joe's simply to confirm what the paper had reported. I apologize to Erin France of the paper, who was kind enough to point out the error to me.

Posted by Lee Becker at 9:20 PM No comments: