Toilet to Go Too

Customers will have about two more weeks to purchase pine straw from the retail and wholesale operation at the intersection of Hog Moutain road and U.S. 441 after the Oconee County Code Enforcement office extended the deadline it had originally set to close down the operation.

On April 6 Code Enforcement Director Steve Hansford sent Tyler McClure a letter saying he had until today to either file for proper zoning for the property on which he is operating or close.

As of 5 p.m. today, according to Planning Director B.R. White, no one has filed a request to rezone the 1.7 acres on which McClure is selling pinestraw. 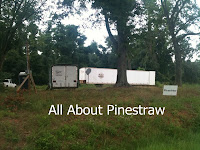 Matt Brock from the Code Enforcement office told me this afternoon that Code Enforcement agreed to the extension because McClure has no place to move his business until the end of the month. Brock said his office did not want to put anyone out of work.

He expects the operation to be moved by June 28, Brock said, though he does not know where it will go.

In the letter Hansford sent to McClure on April 6, Hansford said that he had made a mistake when he issued McClure a business license on Dec. 23, 2009.

The Planning Office and Code Enforcement are both located in the Courthouse Annex across the street from the courthouse. The front offices of the two departments face each other on the first floor of the building.

All About Pinestraw has operated from the site, which has entrances and exits from both U.S. 441 and Hog Mountain road, from trailers and vehicles. It has been serviced by a portable toilet.

The Oconee Enterprise, under the headline “Pinestraw truck devoured by file,” reported in its May 13 edition that fire destroyed a truck on the site of the pine straw operation on May7.

The story reported quite a bit of detail about the fire, based on comments attributed to McClure, and mentioned that a “small trailer” served as an office for the operation.

The story never mentioned that the rather unconventional operation was on land zoned for agricultural and residential use, though I had reported on that fact on April 17.
Posted by Lee Becker at 8:59 PM 1 comment: