A Trail Crosses It

The house and 2.3 acres formerly owned by Al Cuming on Elder Mill road just south of Elder Bridge has gone on the market, listed by Grayson Realty at $200,000. 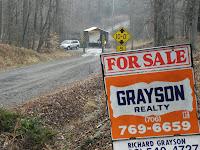 It is via this piece of property that many people visiting the historic covered bridge gain access to Rose Creek, which flows over shoals after passing under the wooden bridge.

The 2.3-acre tract that is for sale was carved from a larger 25-acre farm in 1972, according to documents in the Oconee County Clerk of Courts office. The house itself was built that same year, according to the Grayson listing.

The carved-out and original tract follow Rose Creek first east and then south to a tributary of Rose Creek. That tributary forms much of the southern boundary for the larger parcel, which is not for sale at present.

The property line is the middle of these creeks for both tracts.

Both the 2.3-acre tract and the 23-acre larger tract are owned by James Flanagan of Athens, according to Oconee County tax records. Flanagan is the son of Cuming’s late wife.

In September of 2007, Cuming, who was then 89, was injured when he was hit by a car in a parking lot in Watkinsville. He no longer lives on the Elder Mill road property.

Although the county has designated as a Scenic Preservation area all of the tract on the market, much of the remaining 23-acre tract, property across the creek where Elder Mill is located, and property just east of the bridge, none of the land is owned by the county.

Russ Page, a local advocate of farmland preservation, has worked hard to get the county to purchase key pieces of property in the area. Back in 2007, the local land planning firm Williams & Associates even drew up a concept plan for a county park protecting much of the currently undeveloped land.

So far, the Oconee County Board of Commissioners has been unwilling to spend money to purchase land for the park, though it does have unspent funds from the Special Purpose Local Option Sales Tax just completed that could be used for that purpose and is collecting monies in the current SPLOST that also could be used in that way.

Built in 1897 and moved to its current location in the 1920s, Elder Bridge is one of a small number of covered bridges left in the state.

The bridge is used frequently by the county in promotional photographs and is featured on the home page of the county’s web site.

Debi Grayson from Grayson Realty told me by telephone today she has had many calls in the 22 days the property has been on the market. The house sits high on the ridge and overlooks the bridge, the shoals on Rose Creek and the mill itself.

Visitors often park in the small graveled area after crossing the bridge and walk down a wide trail to the flowing stream. The mill is just across from where this short trail meets Rose Creek, and the Cuming house is on the ridge above.

According to the maps in the courthouse, the trial is on the property that is on the market.

The Oconee County Unified Development Code lists the Scenic Preservation District as an “Overlay District” and “is comprised of land which in the best interest of the citizens of Oconee County should remain in a natural state as nearly as possible.”

The code says that “The intent of the regulations within this Overlay District is to maintain and up-grade the character of historic, natural, archaeological and scenic areas of interest within the County. Such regulations are designed to provide for the preservation of the designated areas without unreasonably denying the right of private land use.”

Also allowed are pasture lands and forests, passive recreation areas, and public parks maintained by the county, the state or the federal government.
Posted by Lee Becker at 10:18 PM No comments: