Oconee Voters Say They Lack Information to Decide on Reorganization

Three months after the Oconee County Board of Commissioners passed an ordinance that changed the organizational chart for the county, about half of the voters in the county said they didn’t know enough about it to have an opinion on the change.

Of those who did have an opinion, most thought the changes were good for the county.

These are the findings of a scientific survey of 181 Oconee County registered voters conducted from Oct. 21 to Nov. 4. Most were interviewed by telephone, though a few were interviewed in-person.

The findings contrast with those presented to the board before it voted to adopt the ordinance on August 4.

Commission Chairman Melvin Davis, who opposed the changes, said that three-quarters of the people in the county opposed the changes proposed in the ordinance. He said he reached that conclusion based on public comments at the three public hearings and on email messages received by the county.

The survey participants were responding to the following question:

“The Oconee County Board of Commissioners recently passed an ordinance changing the organizational chart for the county so that the county administrative officer and finance director report directly to the full board of commissioners rather than just to the board chairman. From what you know, was this change good for the county or bad for the county? If you don’t know enough to have an opinion, just tell me that.”

The survey was conducted by graduate students in the Grady College of Journalism and Mass Communication at the University of Georgia enrolled in a class designed to teach them about social science research methods.

I was the instructor for the class.

As part of the class, the students designed and conducted a survey of Oconee County registered voters that included questions on a variety of topics, mostly dealing with national issues. To localize the survey, which was only conducted in Oconee County, the students included two questions about the county, including the one on the reorganization.

The students followed all standard procedures for such surveys. In the end, they were able to complete interviews with 26.3 percent of the persons whose names were selected randomly from the voter registration list for the county.

They completed interviews with 30.5 percent of those persons whose names were selected and used and who were judged to be living in the county.

The sampling error for the survey was 7.3 percent. This means that the odds are high–19 to 1, in fact–that had all registered voters in the county been surveyed rather than the sample, the actual answer would have been within plus or minus 7.3 percent of the answer obtained from the sample.

The best estimate, then, is that between 44.1 and 58.7 percent of the registered voters did not feel they had enough information to have an opinion, and between 28.1 and 42.7 percent felt it is a good idea. Between 0.0 and 12.8 percent thought it was a bad idea.

Of course, the question on the reorganization could have been asked many different ways, and the answer might well have been different. I wrote this question at the students’ request focusing on what I judge to be the key change brought about by the ordinance, passed unanimously by the four commissioners.

Chairman Davis, who votes only in the case of a tie, did ask that his opposition to the ordinance be recorded in the minutes of the meeting.

The other question in the survey that dealt with Oconee County asked the registered voters how often they read the weekly The Oconee Enterprise.

Readers of the Enterprise were less likely to say they didn’t know enough to have an opinion on the issue than were nonreaders and were more likely to think the change was bad for the county. The changes were large enough to be likely to reflect real differences among all registered voters.

The Enterprise editorialized strongly against the change and attacked the four commissioners promoting it during the months leading up the passage in August.

Oconee County had 21,853 registered voters on Oct. 4, 2009, when I purchased the electronic file from the Secretary of State’s office.

Oconee County has an estimated 32,221 residents, according to the U.S. Census Bureau, and 23,940 are estimated to be of voting age. So the ratio of registered voters to eligible voters is very high. 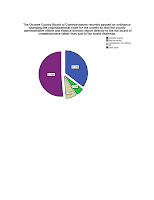