It had $385,344 in unspent funds for Recreation and Cultural projects. 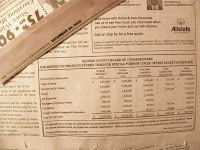 And it had a whopping $4,281,944 in unspent funds for County Facilities Expansion and Renovation.

The only categories approved by voters for which it did not have any money remaining were for Jail Expansion and the Emergency Operations Center, where the $1.3 million and $600,000 allocated respectively was used to pay off debt.

Much of the money in the 2003 SPLOST for Recreational and Cultural projects also was used to pay off debt at the new Oconee Veterans Park on Hog Mountain road, but the $385,344 remained unspent as of June 30, 2009.

On top of these amounts, the county actually collected an additional $631,266 beyond the $25 million anticipated for the SPLOST.

The county also has an unspecified amount of interest it has earned on the SPLOST monies after they were collected from taxpayers and deposited in county accounts.

The figures on money spent from the 2003 SPLOST come from a report that the county was required to file by law. The report appeared as a legal advertisement in the bottom, right-hand corner of page A-8 of the Dec. 24 edition of The Oconee Enterprise.

The Enterprise did not write a story about the report.

The report notes that the expenditures listed do not include any outstanding commitments by the county, and the report does not specify what any commitments may be.

The data on actual funds collected were provided to me by County Finance Director Jeff Benko. They show that between December 2004 and November 2009 the county collected $25,631,266 from the SPLOST approved by voters in November of 2003.

Benko told me in an e-mail message on Jan. 15 that the county is not required to publish any additional reports on SPLOST until next year. “Since we have SPLOST funds remaining in the account (earning interest until expended) the final report will remain open,” he wrote.

The ordinance passed by the county Board of Commissioners in September of 2003 setting up the 2003 SPLOST did not specify clearly what happens to excess funds.

The ordinance said intake from the tax “including interest on the Bonds” is to be allocated based on what was approved by the voters. It calls the figures for each of the projects “an estimated maximum cost.”

Benko said in that Jan. 15 email that “Since the County collected the entire $25M and all program areas were funded to the level that the citizens voted for, the excess collections and interest earned on SPLOST funds may be used as the Board decides necessary for the appropriate area.”

The county began collecting money in December for the SPLOST voters approved in March of 2009. That tax also is 1 cent on the dollar spent.

The issue of money remaining in the SPLOST account came up at the Citizen Advisory Committee on Land Use and Transportation Planning meeting on Jan. 12, when members were guessing about how much the county has to spend toward a new courthouse.

The category, County Facilities Expansion and Renovation, includes monies that can be used for that purpose.

The SPLOST approved by voters in March, however, does not have money designated for a courthouse. That tax will run for six years.

The ELOST currently in effect was approved in July of 2006 and runs for five years. The Board of Education recently decided to spend $900,000 for land for a future local office building from that fund.
Posted by Lee Becker at 10:06 PM No comments: