Following the unanimous recommendation of the 16-member citizen Transfer of Development Rights Study Committee, the Oconee County Board of Commissioners Tuesday night voted to issue a request for proposals for a consultant to study how a TDR program could be implemented in the county.

Strategic and Long-Range Planning Director Wayne Provost, who worked with the citizen committee and presented its report to the Board, emphasized that the precise rights of those who own undeveloped land would need to be established after careful study.

How the developer could use those rights also would have to be determined. As an example, he said, the county could decide to allow developers to use purchased development rights to build residential units above commercial properties, which is not now possible in the county.

"It is just a tool," committee member Wayne Jordan told the Board, "and there are other tools. It would be a tool in the kit to give us some generally desired balance between economic development and preservation of our farmland, of open spaces, of green spaces, historic landmarks, our natural resources, that we do want to preserve."

Despite the presentation by Provost, Jordan and several other committee members, including Russ Page and Albert Hale, all of whom urged immediate action, the Board expressed caution, citing Provost’s estimation that the needed follow-up study would cost between $30,000 and $50,000.

When county Finance Director Jeff Benko said there was money in the current budget to cover the costs of the study, the Board decided quickly to instruct Provost to prepare a scope of work statement that would become part of the request for proposals.

Earlier in the meeting the Board heard Melissa Peppers of accounting firm Treadwell, Tamplin and Company present the Fiscal Year 2008 Report.

At that end of her presentation, BOC Chairman Melvin Davis prompted Peppers to provide a simple summary of her findings.

"As an auditor, give us a general feeling about how you feel about Oconee County’s fiscal responsibility as effective June 30, 2008," Davis said.

"As of June 30, 2008, you were in a very strong position," Peppers said. "As we know, sales taxes will be down. We have questions about the overall effects of the economy. You have a fund balance which will allow you more opportunities than a lot of your surrounding counties."

Finance Director Benko followed this comment with a report on the most recent receipts for sales taxes collected in the county, and his report was more encouraging. Though receipts overall for the first seven months of the fiscal year are down from the first seven months of last year, in January the county received $13,115 more than it received in the same month a year ago.

The January disbursement actually represents tax receipts from November of 2008, and Benko said he found that encouraging.

Chief Tax Appraiser Allen Skinner next came before the Board to explain his work and offer his estimation of the likely change in real property value in the county. As property value goes up, county revenue increases, unless tax rates are decreased.

Skinner indicated that the state sets standards on what kinds of sales he can use to assess fair market value, excluding foreclosures and other types of sales, such as exchanges within a family.

Commissioners Margaret Hale, Chuck Horton and Jim Luke were suspicious, arguing that the real value should be more reflective of what is actually happening in the market. Skinner’s response was that state low does not allow him to do that.

John Gentry, director of Parks and Recreation, also presented the Board on Tuesday night with a plan to create equestrian trails at Heritage park on U.S. 441. The Board put off a decision. 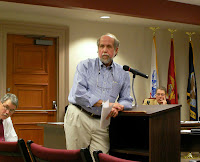