Piping and Filling OK with Corps

Another piece fell into place on Tuesday for the developer of the proposed $76 million Epps Bridge Centre on Epps Bridge Parkway when the U.S. Army Corps of Engineers granted a permit for piping and filling of streams and wetlands on the site.

The Georgia Environment Protection Division still must grant a variance for developer Frank Bishop of Atlanta to allow him to disturb the 25 foot buffer on the half mile of streams on the site.

Bishop also is waiting for the Georgia Department of Transportation to issue contracts for construction of the Oconee Connector Extension, which will provide access to the shopping mall.

The state rejected bids that were submitted in December and will accept new bids in March.

When the Oconee County Board of Commissioners approved the requested rezone for Epps Bridge Centre in Oct. 7, it stipulated that the county will not grant any permits for the project until the state had let contracts on the roadway project.

The Corps of Engineers has not yet posted its decision on the permit application on its web site, but Billy Birdwell, chief of Public Affairs for the Savannah District of the Corps, told me in an e-mail message today that he had checked with the Regulatory Division and that the permit was issued on Jan. 20.

In the application for the permit filed in late December of 2008, Bishop asked for permission to pipe 2,678 feet of perennial streams and fill 1.06 acres of wetlands and ephemeral drainages of wetlands.

Construction of the mitigation bank in Greene County also required a permit, and the Corps issued that permit on June 6, 2008.

Although the Georgia Environmental Protection Division requires that the applicant must have a Corps permit before it can grant a variance for the buffer, it issued an advisory and solicited public comment on the Bishop application on Dec. 18, 2008.

Among the local individuals and groups that submitted comments and asked for a public hearing were the Upper Oconee Watershed Network and Georgia River Network.

"In order to meet water quality standards, the construction site should be redesigned to retain more of the natural areas and to include adequate sediment and stormwater ponds to improve water quality before stormwater exits the property and enters the McNutt Creek," April Ingle, executive director of the Georgia River Network, wrote in her letter.

The proposes shopping mall is designed to include a movie theater, restaurants and large and small retail space, including for major anchors. 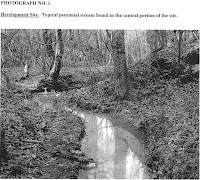 A stream on the site; photo scanned from the application.