A Chance Not Seen

Among the 21 letters that the state Environment Protection Division received in response to its public advisory on the proposed $76 million Epps Bridge Centre was one from the government of Athens-Clarke County, but the letter simply repeated arguments the city and county already had made to the Northeast Georgia Regional Development Center.

W. Alan Reddish, Athens-Clarke County manager, said "There is obviously some potential for environmental impact to ACC property downstream" from the site off Epps Bridge Parkway and that "the project could potentially degrade water quality and likewise affect quantity."

The letter said that areas around the Tanglewood, Towns Walk and McNutt Creek subdivisions are most likely to be affected by the project, but it also could "affect the quality of the receiving waters for ACC’s waste water treatment plants on the Middle Oconee and North Oconee Rivers. Recommendations for greater infiltration of stormwater and increased canopy cover would seem to be in order."

Reddish wrote his letter on Jan. 16, three days after Holly Hills resident Pamela Kohn contacted ACC District 6 Commissioner Ed Robinson to object to the variance and ask for assistance in fighting it.

The state EPD had issued the advisory seeking public comment on Dec. 18, and the deadline for comments was Jan. 19, the Martin Luther King holiday. Reddish’s letter was stamped received by the EPD on Jan. 20.

The letter was a shortened version of comments submitted by Leah Graham Stewart of the Athens-Clarke Planning Department to the Northeast Georgia Regional Development Center on July 1, 2008. NEGRDC concluded in July of 2008 that the "development is not in the best interest of the Region and therefor the State."

Despite that, the Oconee County Board of Commissioners approved the rezone request by developer Frank Bishop of Atlanta for the shopping center project on Oct. 7, 2008.

The only new part of the Jan. 16 letter from Reddish was a request that EPD hold a public hearing before it reaches its decision on the shopping center project.

The EPD has forwarded the 21 letters it received during the public comment period to developer Bishop and asked him to respond. April Ingle, executive director of the Georgia River Network and one of those who wrote to object to the variance, obtained copies of the letters and gave them to me.

Michael Berry, environment specialist at the EPD handling the variance request, told me on Tuesday that there is no timetable for the EPD to decide on the variance request. He confirmed, as reported in the Athens Banner-Herald on Feb. 9, that he had sent the 21 letters to Bishop asking for comment.

Bishop is asking the state to allow him to encroach on the 25-foot buffers on the half mile of flowing streams on the site so he can build his shopping center, which is to include restaurants, a movie theater and both large and small retail buildings. The plan is to pipe and fill those streams, which are tributaries to nearby McNutt Creek.

On Jan. 16, 2009, the U.S. Army Corps of Engineers issued a permit to Bishop allowing him to pipe and fill the 2,678 feet of perennial streams, 396 feet of ephemeral streams, and 0.56 acres of wetlands so he can build his shopping center.

Bishop is required to mitigate this destruction of the Oconee County streams and wetlands by restoring 981 feet of perennial streams and 2 acres of wetlands on a tributary of Town Creek in Greene County north of Greensboro. Bishop bought that land for the mitigation project.

Bishop has until Jan. 16, 2014, to complete his project, according to the USACE permit.

Berry told me that he was aware of the discrepancies in the acreage in the various applications and asked Bishop for clarification. He said he believes Bishop finally has gotten the acreage right in the EPD application.

In the end, Berry said, the state is concerned about the 2,678 linear feet of perennial streams, and that figure has been consistent across the various applications. The USACE application does use that figure, but the NEGRDC report said "approximately 2,421 linear feet" of streams will be impacted.

The Georgia Department of Transportation is expected to let contracts next month for construction of the Oconee Connector Extension, which will provide access to Epps Bridge Centre. The state rejected bids that were submitted in December.

When the Oconee County Board of Commissioners approved the requested rezone for Epps Bridge Centre, it stipulated that the county will not grant any permits for the shopping center until the state had let contracts on the roadway project.

Athens-Clarke County has kept a low profile in the discussions of the Epps Bridge Centre project, which will dump a lot of traffic on Jennings Mill Road. One of the access roads from the Connector will connect with Jennings Mill Road.

Autos leaving Epps Bridge Centre and using that exit will travel north past Kingswood subdivision on Jennings Mill Road to its intersection with the Atlanta Highway across from Logan’s Roadhouse. That is one of the more congested areas in that part of the city.

The Epps Bridge Centre, with its proposed anchor retail stores and movie theater, will compete with nearby Georgia Square Mall in Athens-Clarke County.

Athens-Clarke County and Oconee County are currently negotiating over creation of a joint economic development body for the two counties that was recommended by a task force of local business leaders. 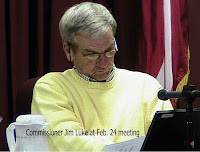 The issue was discussed at the Athens Clarke-County mayor and commission meeting on Feb. 19 and at the Oconee County Board of Commissioners meeting on Tuesday night. It is clear that there is no consensus at present as to how to proceed.

Any strong effort by Athens-Clarke County to slow down Epps Bridge Centre, which Oconee County has strongly promoted, would not help that cause. Oconee County fronted more than $5 million to the state to cover right of way purchases for the Oconee Connector gateway to the project.

Among the letter writers asking the state not to grant the requested variance for construction of Epps Bridge Centre, in addition to Reddish and Ingle, were representatives of the Athens Grow Green Coalition, the Upper Oconee Watershed Network and Georgia Conservancy. Individuals from Oconee and Clarke counties also wrote. I submitted a letter.

All but four of the 21 letter writers asked the EPD to hold a public hearing before making a decision.

Berry said the EPD would look at the responses to the 21 letters when Bishop and his environmental consultants provide them and then make a decision.

"I don’t see there is very much likelihood of there being a public hearing," Berry told me on Tuesday. He said he had not been involved in a public hearing on a variance request in the four years he has been in his current position.
Posted by Lee Becker at 10:13 PM

Obviously that "progressive" ACC Government does not value water very highly (except when they do'nt have any to support the next wall to wall developmet). They have been dumping semitreated sewage into the Oconee River for the last 50 years and are just now taking some action to stop it (only after numerous fines and directives by regulators.

Curious why there is lots of opposition to this project, while ACC and the Environmental folks were silent with the relocation of St. Joes, developing 40 acres also on McNutts Creek. Obviously the Bishop development is bigger, but St. Joes is in ACC and simply b/c it claims to be a church it got by with lots of development and encroachment on Holly Hills neighborhood.

St. Joseph's is not irreversibly filling in wetlands and removing a recharge system from the environment.