Oconee County officials and Atlanta developer Frank Bishop got a setback today when the Georgia Department of Transportation deferred the awarding of a bid for the Oconee Connector Extension, which will open up land for development in the county, including for Bishop’s proposed Epps Bridge Centre on Epps Bridge Parkway.

GDOT opened six bids on April 17 for the project and was expected to select the successful bidder today. The department offered no explanation for the deferral.

The state today did make awards for a $1.2 million truck weigh station on I-20 in Douglas County and for $1.1 million for traffic signal upgrades in Spalding County. It deferred awarding a project in Coweta County, which had a low bid of $23.2 million.

The low bid for the Oconee County project was $13.5 million. The 1.5 mile Oconee Connector Extension will form a loop from SR 316 at its current intersection with the existing Oconee Connector back to Epps Bridge Parkway near Lowe’s. It will include a flyover of SR Loop 10.

The Oconee County Board of Commissioners rezoned the 63 acres for the shopping center in October but said Bishop could not begin any construction on the $76 million Epps Bridge Centre until bids for the Oconee Connector Extension had been let by the state.

Oconee officials had said they expected the state to call for bids for the Oconee Connector Extension several times during the last year, but the state delayed doing so until Nov. 21, 2008. On Dec. 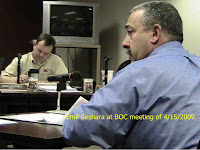 12, 2008, the department opened eight bids, and on Dec. 24 it rejected all eight for unspecified reasons.

Without this road, Epps Bridge Centre will have only one entrance and exit–on Epps Bridge Parkway opposite the Waffle House restaurant.
Oconee County has promoted the project and even put up $6 million to purchase right of way for the roadway.
The state has now reimbursed the county this amount, but county Finance Director Jeff Benko told the Board of Commissioners on Tuesday night that the loss of interest income on the $6 million contributed to the $1.2 million revenue shortfall the county is expecting for this fiscal year in its general fund.
The county also is running a deficit in collection of revenue for the Utility Department, Benko said Tuesday night. The Utility Department operates with a budget separate from the general fund. The county is considering a water rate increase to address an expected shortfall next year.
GDOT posted its decision to defer awarding bids on the Oconee Connector project this morning, and I sent email messages to County Administrator Alan Theriault and Public Works Director Emil Beshara asking them if they had any insights as to when the decision might be made. Neither has responded.
The bidding has been closely followed by county officials, and The Oconee Enterprise contained a story in the April 23 edition in which Beshara was quoted as saying he expected the low bidder to get the award.
The Enterprise touted that story, based on the opening of the bids, with a "Seen First" red label indicating that the paper had posted the story on its web site on April 20. The state actually had announced the opening of the bids on April 17, and I had posted that information and a link on this blog on April 17.
The Enterprise story on April 23 contained an error the paper has made in earlier stories as well. The Connector will intersect with Epps Bridge Parkway between Lowe’s and the building containing the Starbucks, not between Starbucks and McDonalds, as the paper reported.
Posted by Lee Becker at 6:55 PM