Paying More to Drink and Flush


Oconee County residential water users will be asked for the second time in a little more than a year to pay more for water if the Board of Commissioners approves a budget request made Wednesday night by Utility Department Director Chris Thomas.

Thomas presented a budget that calls for an increase of 31.8 percent in the base water rate, or the minimum amount paid by water customers. That rate will increase from its current $14.04 per month to $18.50, if the proposal is approved by the Board.

The rate increases are needed to compensate for a decrease in water sales and consequent decrease in revenues for the Utility Department, Thomas said.

For $18.50 customers would receive 2,000 gallons of water per month. Under both the current and the proposed scheme, water rates increase with use. Thomas proposed that at each step in the rate scheme water would cost 10 cents more per 1,000 gallons used.

The Board of Commissioners increased water rates in the county on April 1, 2008, but only for those who used large amounts of water. For those using more than 12,000 gallons of water per month, the rate of increase was 30 percent or more.

Thomas said at the special meeting of the Board on Wednesday to review budgets requests for the 2010 fiscal year that the county has not increased the basic water rate since 1998.

The 2008 rate increase did not change the base rate and was presented as an attempt at conservation pricing. Thomas acknowledged at the Wednesday night meeting that he could not determine if the conservation pricing had decreased use, given restrictions on water use imposed by the state. 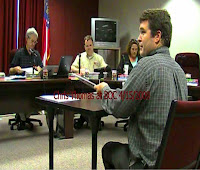 The 2008 increase did not affect commercial users, but the rate increase Thomas proposed on Wednesday night would increase the commercial base rate from $14.04 to $18.50, and the rate per 1,000 gallons of additional water used from $4.80 to $4.90.

Commercial users at present and with the new plan would pay the same per 1,000 gallons used above the base regardless of how much was used.

The Utility Department had revenues of $3.3 million for the first eight months of the current fiscal year. That means the department has only four months to make up the $3.2 million needed to reach the projected budget of $6.5 million.

In the fiscal year ending June 30, 2008, the Utility Department fell $1.2 million short of its projected budget of $7.1 million.

Thomas said even with the increases he is proposing, Oconee County citizens would have a lower base rate for water than residents of Barrow County and Winder, though it would be higher than in Walton and Jackson counties.

At the April 7 BOC meeting, when Thomas first said that he expected to be proposing rate increases for water and sewage services, he also indicated that the Utility Department was slowing work on the Hard Labor Creek Reservoir in Walton County.

To same money and because of decreased need, the county plans to move forward with land acquisition but delay other parts of the project, Thomas said. Oconee is a junior partner with Walton County on the project.

It is good that the water customers will have to pay for the Walton County Hard Labor Creek boondoggle. I hope the rates go to $50.00 per 1000 gallons. Maybe then those who sat on their rear ends while the HLC project was approved will remember we still have two BOC members who voted for it, Davis and Luke, and hold them accountable.

How nice of them to reward us for our conservation. They could probably recover from the economic hardship by allowing people to return to less conservative watering routines. I wonder if they'd consider a fixed monthly rate for consumption up to a certain quantity for a year. At the end of the year or every six months, accounts are reconciled and customers with excess usage have to pay up. Customers with a positive balance could opt for a credit or "return" the credit for reinvestment that must be used for a specific purpose. I wonder if water utilities could be managed like an electrical utility as a member-owned coop like the local EMCs.