Oconee County had two sewage spills into local creeks last week, requiring formal posting of signs at the sites and the filing of reports to the state Environmental Protection Division. 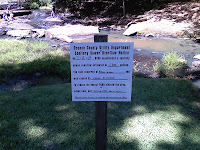 day that "due to the size and nature of the spills, EPD did not require creek sampling. In a situation like this, the peace of mind that the sampling provides was worth the extra cost and effort."

Visitors to the popular Harris Shoals Park in Watkinsville over the weekend were confronted with a sign where visitors often wade. The sign, pictured on the right, informed the visitors of the spill.
Thomas told me the spill was about a half mile upstream from the sign.

According to the public notice on the county web site, the spill was caused by an accumulation of roots in a sewer line. After the blockage was removed, crews applied lime and removed debris associated with the resulting spill, the notice said.

The spill was caused by a traffic incident that severed a valve attached to a pressurized sewer pipe, according to the county report. After the line was repaired, crews applied lime and removed debris and standing water associated with the spill, according to the report.

Barber Creek flows through a large number of subdivisions in the northeastern part of the county downstream from the spill.

On Feb. 24 the county reported a spill of an estimated 8,000 gallons of sewage into Calls Creek near the lift station on Durham Mill Way. The line became blocked, forcing the sewage out of a manhole and into the creek.

The county operates two sewage treatment facilities, the first on Calls Creek in Watkinsville and the other on Barber Creek on Rocky Branch road near the new high school. The Calls Creek plant uses membrane filtration for treatment, while the Rocky Branch facility applies the sewage to controlled hay fields on the site.

The county is in the process of expanding the capacity of the Calls Creek facility. Plans to upgrade the Rocky Branch facility to a membrane filtration plant have been put on hold because of the effects of the economic downturn and the drought on Utility Department revenues.
Posted by Lee Becker at 10:29 PM