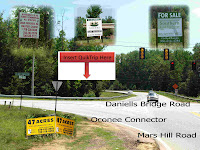 Most of the tracts along the road and near it are owned by corporations waiting for the right time to begin development of them.

Included among those on Daniells Bridge Road listed for sale is a 17-acre tract that was rezoned in 2007 for two, seven-story high office buildings. Developers said at the time that the buildings would be used for a Zaxby’s headquarters, currently in buildings adjoining that property.

The 17-acre tract, on the south side of Daniells Bridge Road, has just recently been posted for sale by Southern Land Exchange, with offices on Jennings Mill Road, while the others have been listed as for sale for longer periods of time.

Any new owner of the 17-acre tract will be required to come back to the county with a new development plan if the owner does not plan to build the two office buildings. The property was rezoned in 2007 for an office business park.

The 2030 Future Development Map for the county designates all of the properties on both sides of Daniells Bridge Road from the Oconee Connector to Chestnut Hill Road as part of the regional center that includes the existing massive commercial development along Epps Bridge Parkway and SR 316.

The exceptions are the four eastern most lots on the south side of Daniells Bridge Road just before Chestnut Hill Road.

The county plans to make the section of Daniells Bridge Road between the Connector and Chestnut Hill Road the southern part of a commercial loop road circling SR 316 and Epps Bridge Parkway.

The roadway to Home Depot then will be extended across SR Loop 10 to connect to Daniells Bridge Road near Chestnut Hill Road.

That roadway, which will provide access to the proposed $76 Epps Bridge Centre shopping mall next to Lowe’s, will dump traffic onto Daniells Bridge Road long before the second overpass or flyover to Home Depot is built. The county has said that construction of that flyover is at least 10 years in the future.

In the meantime, the county plans to spend $400,000 to make Daniells Bridge Road three lanes wide from the Oconee Connector nearly to Chestnut Hill Road. This upgrade will not eliminate the blind curve but simply run a center turn lane through it.

QuikTrip is counting on the traffic generated by Oconee Connector Extension, and its representatives told the Board of Commissioners on June 2 that it should not be required to plant the 14 shade trees required on the site by the county’s Uniform Development Code (UDC) because the trees would make it too hard for drivers to see the site and its signage.

County Planner Krista Gridley said she had been reviewing landscaping for three years for the Planning Department and that developers frequently ask to be allowed to plant fewer required trees. She said during those three years no exceptions had been granted.

After a 50-minute discussion, Commissioners Chuck Horton and Jim Luke voted to turn down the request. Commissioner John Daniell voted against the denial motion, saying he didn’t want to force the developer to plant the trees as required by the code. Commission Margaret Hale missed the meeting because she was sick.

When construction is completed, the gas station will contain a 4,555 square foot convenience market and 16 fueling positions.

QuikTrip also said at the June 2 meeting that the site was not big enough to accommodate the number of parking spaces required by the UDC unless the county agreed to allow it to put eight of the spaces inside the 30-foot parking setback from the roadway rights of way on the Oconee Connector and Daniells Bridge Road.

Daniell and Luke agreed to that request even though Public Works Director Emil Beshara had said in the staff report on the project that he objected to the intrusion into the buffer at the Oconee Connector entrance. "A vehicle backing out of either of the spaces in question may interfere with entering traffic," he said in the report.

The Commissioners stipulated that only employees are to be allowed to use the parking spaces in the setback on the Oconee Connector, presumably with the view that employees are better at backing out of parking spaces without interfering with entering traffic than patrons.

The 47-acre tract listed for sale on the northwest side of the intersection is owned by Deferredtax, LLC, of Lawrenceville, according to Oconee County tax records. The tract actually is made up of three different parcels and contains all of the frontage on SR 316 between the Oconee Connector and Virgil Langford Road.

Adjoining both the 316 Holdings Group property and the Fire Station is the 6.3-acre site of the SpringHill Suites by Marriott, scheduled to open this summer. That site was rezoned back in 2007, at the same time as the site across the road where the two seven-story buildings were to be built.

The seven-acre site just east of the hotel is owned by Glades Commercial Properties LLC of 2500 Daniells Bridge Road, according to tax records. Glades also owns the 1.7-acre site that is listed for sale just east of the Office of Information and Instructional Technology (OIIT).

According to the Georgia Secretary of State database, Carl R. Nichols is the registered agent for Glades, which owned the hotel site, the OIIT site, and the site of the Exchange office building behind the 1.7 acres site listed as for sale.

The OIIT site is owned by the county itself through the Oconee County Development Authority.

The property on which the St. Mary’s Heart and Vascular unit sits is owned by 316 LLC of Watkinsville. According to the Secretary of State records, Jeff B. Bell is the agent.

The 17-acre site across Daniells Bridge Road now listed for sale is owned by Daniells Bridge Partners, LLC., with the same address as 316 LLC and also with Jeff B. Bell as agent.

Southern Land Exchange LLC, the agent for the 17-acre site, is headquartered at 1551 Jennings Mill Road. Secretary of State records list Steve Ebbert as the agent. Tax records list Steve and James Ebbert as owners of the seven-acre hay field at the corner of Daniells Bridge Road and Hog Mountain Road that already has been rezoned for commercial and office park development.

Developer Mike Thornton owns three tracts totaling five acres on the north side of Daniells Bridge Road opposite Founder’s Boulevard. The tracts, one of which contains a cell tower, are listed for sale.

Zaxby’s Holdings owns the 6.4 acre vacant lot east of Founder’s Boulevard, and Thorton owns three additional tracts on the south side of Daniells Bridge Road. Two of those are west of the blind curve and the other is on the east side of the curve.

The Board of Commissioners rezoned nine acres on the north side of Daniells Bridge Road just east of the blind curve on Dec. 2, ignoring the 400 plus petitions submitted by neighbors opposed to the rezone. That property was owned by Dolores Lance and Dorothy Anglin.

The BOC found the unspent $400,000 in Special Purpose Local Options Sales Tax funds to cover the widening of the road as a way of justifying the rezone.

Reuben Moss and Thomas Kittle live on and own the remaining properties on the north side of Daniells Bridge Road up to Chestnut Hill Road. Moss’ property is 2.5 acres. Kittle’s 20- acre tract extends to and along Chestnut Hill Road itself.

The BOC votes on the QuickTrip variance requests on June 2 as well as on the rezone of the tract in the blind curve on Dec. 2 confirm what the developers in the county already seem to know:

Everything is negotiable when it comes to development in Oconee County.
Posted by Lee Becker at 2:56 PM

I was reading your latest article on the QT coming to Oconee County. I would like to make a comment on the variance request for the tree planting. The applicant advised he was planting the required number of shade trees under the ordinance and, in addition, planting a large number of under story trees not required. The staff report confirmed the applicants claim. The variance was related to the location of the shade trees. The ordinance requires planting every 25 feet along the road frontage. I believe the request was reasonable. The total number of shade trees required would be achieved. In addition, it is my understanding that the purpose of the shade trees is to provide canopy cover and not to serve as a screening buffer. The desired canopy cover required under the ordinance would be achieved under the variance. Not only would the QT meet the canopy cover tree requirement, the under story trees would provide additional, positive environmental impact.


Thanks for your time