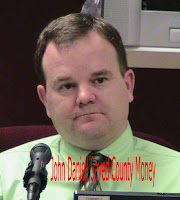 Davis’s decision not to take his reward for being re-elected didn’t change that distinction.
Posted by Lee Becker at 9:15 PM

And the point is? Perhaps every year new commissioners should be elected. Saves salary costs, cuts fat, tightens it up. While cutting the budget beyond what the Chairman and Chief Financial Officer worked out (three million dollars lower than the year prior), none of the three returning commissioners turned down their significant increases. What's that about sauce for the goose?

If the 4 Coms. do their jobs they will earn the money. They actually prevented far more spending during the past budget cycle than their total salaries.