Walk or Bike to Movie, Restaurant

When the Mars Hill Road widening project is completed sometime in the future, a bicyclist should be able to ride from downtown Watkinsville to the planned Epps Bridge Centre on Epps Bridge Parkway entirely within a bike lane.

And a determined walker or runner could cover the six plus miles entirely on sidewalks.

Both bike lanes and sidewalks are part of the design for the roadway prepared by Moreland Altobelli Associates Inc. of Norcross under a design contract with the county signed more than 10 years ago.

The county approved a change order to that contract at the Board of Commissioners meeting on Sept. 1, awarding up to $142,666 for changes that will need to be made in the design. 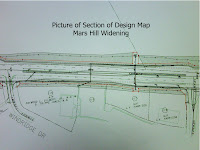 i will be asked to update the existing plans to reflect recent property splits and mergers, new developments, and design modifications to the Mars Hill Road intersection with Daniells Bridge Road.

The firm also will have to split the project into three segments, since the county has received money only for right of way acquisition from SR 316 to Hog Mountain Road. The state has not said when it will release money for right of way acquisition for the second phase from Hog Mountain road to US 441, or the third phase from US 441 to SR 15 in Watkinsville.

The BOC on Sept. 1 also voted to issue a request for proposals for right of way acquisition services for the first phase of the project.

None of the changes that Moreland Altobelli will be asked to make will alter the basic design of the road. The new Mars Hill Road will be four lanes wide and include turn lanes and acceleration and deceleration lanes.

It also includes sidewalks and bike lanes on both sides of the road.

Dan Wilson, assistant county engineer, told me on Friday that former Public Works Director Mike Leonas was determined that sidewalks and bike lanes be part of the project. Leonas left the public works department in the summer of 2007.

Though the developers of the proposed Epps Bridge Centre did not incorporate bike lanes into the design, they can still do so. That shopping center is expected to include an entertainment complex consisting of restaurants and a 16-screen movie theater.

Epps Bridge Parkway east of where the connector loop will intersect with it also has sidewalks and bike lanes.

The Athens Banner-Herald reported on the BOC action on Mars Hill in its Sept. 4 edition, but it incorrectly said the board had accepted a proposal from Moreland Altobelli for design of the project. The board only approved a change order in the existing contract to add the modifications needed.

The Oconee Enterprise did not mention the change order and made only passing reference to the request for proposals for right of way acquisition in its story in the Sept. 3 edition about the most recent BOC meeting.

At the Aug. 25 agenda setting meeting of the board, Emil Beshara, current public works director, outlined the board action being requested and also invited citizens to drop by the Public Works office to review the designs.

I visited the office on Friday and reviewed the Moreland Altobelli documents with Wilson.

Wilson indicated that the roadway will be built to state standards, though the section from Hog Moutain Road to SR 316 will remain a county, rather than state, roadway.

He indicated that the bike lanes will be adjacent to the regular auto lanes, rather than separated from them, meaning bikers will be competing with fast-moving automobile traffic.

The median will be grass in places and raised concrete in others, he said.

The right of way work for the three mile of roadway covered by phase one is expected to begin in five months and take about two years.

The Mars Hill widening is designed to ease traffic flow but also to open up more land for commercial development.

So far, the state has not found the $19 million for actual construction of the first phase of the road.
Posted by Lee Becker at 1:05 PM