Ethics, Solicitation, a Flyover and an Unspent $4 Million

Four meetings of Oconee county governing and advisory bodies in the next two weeks should help shape county policy regarding roadway construction, the future of the courthouse in Watkinsville, ethics, economic development including collaboration with neighboring counties and restrictions on solicitation in county roadways.

The Board of Commissioners will meet at 7 p.m. on Tuesday night in its chambers at the courthouse in Watkinsville to deal with two issues placed on the agenda by Commissioner John Daniell–a potential ethics policy for the county and county strategy for promoting economic development.

Daniell told me tonight he wants to see if there is interest in creating a committee to develop an ethics policy for the county and wants to move forward with discussion of ways the county can promote economic development.

Included in the development discussion, he said, should be possible collaboration with Clarke County. Discussions of such a collaboration have stalled after a panel of community and business leaders recommended in May of 2008 that the two counties work together on development. 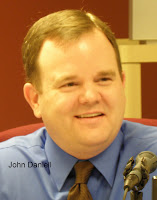 The agenda also includes a report by County Attorney Daniel Haygood on a potential solicitation ordinance for the county. The BOC asked Haygood to work on such a document at its Aug. 25 meeting and report back with recommendations after complaints about groups approaching automobiles in busy intersections in the county as part of fundraising activities.

At present, the county has no ordinance to regulate these activities.

The BOC also is scheduled to consider a request for proposals for utility relocation design for the widening of Mars Hill road from SR 316 to Hog Mountain Road in Butler’s Crossing and discuss bids for Jennings Mill Parkway utility relocations.

The board also is to hear a report form county Utility Director Chris Thomas about an upgrade to a county well and the sale of water from Oconee County to Walton County from groundwater sources.

The meeting on Tuesday is to set the agenda for the meeting on Oct. 6, so many of these issues will carry over to that meeting for action. That meeting also begins at 7 p.m. at the courthouse.

On Oct. 13 the Madison Athens-Clarke Oconee Regional Transportation Study (MACORTS) has scheduled a public meeting for 5 to 7 p.m. at the Community Center in Oconee Veterans Park, 3500 Hog Mountain Road, to present an overview of county priorities for roadway construction in the urbanized part of the county for the next five years.

Watkinsville, which has no representation on MACORTS other than through BOC Chairman Melvin Davis and citizen Frank Watson from the county Citizen Advisory Committee on Land-Use and Transportation Planning, has gone on record opposing the Simonton Bridge road widening.

The MACORTS Policy Committee at its meeting on Sept. 9 adopted the three projects as the top priorities for the county. Official minutes of the meeting have not yet been released, but Sherry Moore, a transportation planner with Athens-Clarke County who is a designated contact person for MACORTS, said Davis and Watson were present at that meeting.

At the Feb. 10, 2009, meeting of the Land Use and Transportation Planning Committee, the group reviewed a series of projects that it was told Chairman Davis had asked it to consider for possible elimination from the list of MACORTS projects, but the committee did not rank order any of the remaining projects–including the three on the final MACORTS list, according to the official minutes.

According to the minutes of subsequent committee meetings, it never has rank ordered or discussed further the projects on the MACORTS list.

The MACORTS rankings also have not been discussed by the BOC at any of its public meetings since the first of the year, according to the minutes of those meetings.

Following the public hearing on the MACORTS rankings of the road projects, the Land Use and Transportation Committee will meet in the same room at the Community Center in Oconee Veterans Park to continue its discussion of the future of the courthouse.

County Administrative Office Alan Theriault is scheduled to talk with the committee about administrative space needs for the county.

The BOC asked the Land Use and Transportation Committee back in March to consider what to do about the courthouse, and the group has held a series of meetings on the topic.

On Nov. 4, 2003, voters in the county approved a Special Purpose Local Option Sales Tax of one percent for a number of projects, including, according to the ballot, "the acquisition, construction, equipping and installation of expansions of the County Courthouse, the County Government Annex Building, and County Libraries."

The tax designated $4.6 million of the expected $25 million in revenue from the tax for this project.

County Finance Director Jeff Benko told the Land Use and Transportation Committee at its Sept. 8 meeting that about $4 million of that amount remains uncommitted and unspent. The tax is to expire at the end of this month, but it will be followed by another 1 percent tax to run for six years. That tax does not include any mention of the courthouse.

Benko told me in an email message on Sept. 22 that, as required by law, he will have a final report on SPLOST 2003 spending by the end of December of this year and will share it with the public and the board at that time.

In the discussions before the Land Use and Transportation Committee, Strategic and Long-Range Planning Director Wayne Provost, who brought the board’s request for a review to the committee, frequently has referenced the case of Brian Nichols in Atlanta as one of the reasons for the need for a new courthouse.

The current courthouse does not provide the kind of security that the Nichols case illustrates is needed, Provost said. Nichols went on a killing spree in the Fulton county courthouse in Atlanta, where he was on trial for rape.

Nichols escaped from custody and murdered the judge presiding over his trial, a court reporter, a Sheriff's Deputy, and later a Federal agent.

That event was on March 11, 2005, however, or more than a year after Oconee County voters had approved the 2003 SPLOST calling for "the acquisition, construction, equipping and installation of expansions of the County Courthouse."

No one has come forward at the Land Use and Transportation Committee meetings to indicate what county officials had in mind back in 2003 when the county put the SPLOST tax initiative together.

The resolution putting the issue on the ballot was passed by the board on Sept. 2, 2003, but only Davis and Commissioner Margaret Hale from the current board were on the board at that time.

At the Sept. 8 meeting, Provost stressed that the county at present doesn’t know what its needs are and doesn’t know how to go about meeting them. He said the county should contract with an expert to help it decide these things.
Posted by Lee Becker at 8:48 PM

Mr Becker
Thanks for an article that has actual useful information presented in context.

Lee, did Sherry Moore indicate when the minutes of the Sept 9th meeting would be released? Will the document be posted on the MACORTS web site?

Sherry Moore said the minutes would be released when they have been approved by the committee. Minutes are posted on the MACORTS site.