Oconee QuikTrip To Include 19 Willow Oaks and 7 Red Maples

Not Hiding the Drinking

Sometime in the next three to six months, drivers using the Mars Hill road/Daniells Bridge road/Oconee Connector intersection will have a chance to stop for a coffee/toilet/snack break mid-junction at the new QuikTrip, officially to be QuikTrip Store No. 819.

Construction crews started clearing the 1.3 acre lot at the northeast corner of the busy intersection on Monday.

When work is finished–the construction plans submitted on Oct. 22, 2009, and approved by the county on Nov. 4 show this lasting six months–all but 0.3 acre of what was until Monday a mostly wooded lot will be covered with impervious surface.

Included will be a 4,555 square foot building with a metal exterior, eight pumps, two of which will dispense diesel fuel, and 27 parking spaces.

Also included will be the tree buffer that the county insisted must be planted on the site to meet uniform development code standards. QuikTrip chose 19 willow oaks and seven red maples, each to be 12 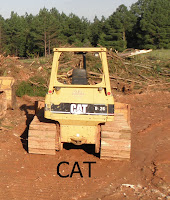 -feel tall when planted, according to the construction plans.

QuikTrip had asked for a variance so it didn’t have to plant the trees and said denial would be a deal-breaker, since the trees would hide the gas station from passing motorists.

The construction work on Monday confirmed that QuikTrip was going to build the gas station even though the county–at the insistence of its planning staff--held the line.

QuikTrip purchased the property on June 10, or eight days after the variance hearing, with the stipulated purpose of building the gas station and convenience store.

B.R. White, planning director of the county, told me today that QuikTrip said it plans to complete construction in half the six months listed on the plans, but he doubted this would be possible.

Gina Lindsey, clerk of the Board of Commissioners, said today that QuikTrip has not yet submitted an application for a license to sell beer and wine on the site but that the process usually only takes about 45 days, giving QuikTrip plenty of time to get the license before its grand opening.

QuikTrip also had asked for a variance in the county’s vegetative buffer requirements for behind Store No. 819 because it was worried about people drinking beer and wine hidden from public view by the trees. It agreed to a wooden fence instead.

So if QuikTrip gets the beer and wine license as expected, those stopping for a coffee/toilet/snack break at the Mars Hill/Daniells Bridge/Oconee Connector intersection also will be able to pick up a six/pack.

They just won’t be able to hide in the trees on site and drink it.
Posted by Lee Becker at 10:14 PM