The four-laning of Simonton Bridge road made it onto the Madison Athens-Clarke Oconee Regional Transportation Study (MACORTS) list of top roadway projects for Oconee County when the Policy Committee approved its 2010-2013 Transportation Improvement Program and 2014-2015 Second Tier of Projects on Nov. 17.

The action was taken despite the protests of Watkinsville city officials against the project and overwhelmingly negative feedback during the public comment period. 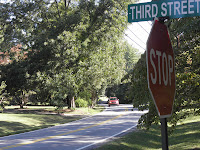 at the Nov. 17 meeting that the county will come back early in 2010 and ask for an amendment to the report the Policy Committee adopted, according to Sherry Moore, a transportation planner with Athens-Clarke County and the designated contact person on MACORTS matters.

Moore told me in a telephone conversation on Nov. 24 that Provost said Oconee County wants to specify that only intersection improvements will be made to Simonton Bridge road.

The document approved on Nov. 17, however, describes the project this way:

This actually was a change from the draft document, which the Policy Committee had approved on Sept. 9. That document described the project this way:

"Widen Simonton Bridge Road from SR 15 to the Clarke County line. This project would include 4-ft. bike lanes." The box on the form in which number of lanes was to specified was marked "n/a".

At that same meeting on Sept. 9, the Policy Committee approved the final draft of the 2010-2035 MACORTS Long Range Transportation Plan (LRTP) update, which described the Simonton Bridge road project this way:

"Widen/reconstruction from 3rd St to Athens-Clarke County line to make 4-lane roadway with additional turn lanes as needed. Project will include 4-ft bicycle."

Oconee County Board of Commissioners Chairman Melvin Davis and Oconee County citizen representative Frank Watson attended the meeting on Sept. 9, according to the official minutes, and both voted for the 2035 Long Range Transportation Plan with the four-lane description and the draft of the 2010-2013 Transportation Improvement Program, which does not specify the number of lanes for Simonton Bridge road.

The official minutes of the Nov. 17 meeting have not yet been released, Moore told me, but she did say that in addition to Strategic and Long-Range Planning Director Provost, Davis and Watson were in attendance. Provost is not a voting member of the Policy Committee, but Davis and Watson are.

The Watkinsville city council voted unanimously on Aug. 12 to oppose the widening of Simonton Bridge road because of its effect on the city.

According to the proposal, the widening would run from the Athens Clarke County line to Third avenue in Watkinsville, where it would revert to two lanes. At that point, Simonton Bridge road continues for three additional blocks to Main street.

All federally funded transportation projects for the urbanized part of Oconee County must be included in the Policy Committee-approved TIP prior to receive federal funding. The state also uses TIP to target state roadway funding.

Oconee County has three road projects on the TIP list of transportation improvements to be considered for financing in the next six years by state and federal road funds.

The first phase of the Mars Hill road project–from SR 316 to Hog Mountain road in Butler’s Crossing--is the only Tier 1 project in the county. The state has promised to provide funding to cover right-of-way purchases in Fiscal Year 2010.

Funding for actual construction does not appear in the TIP plans running through Fiscal Year 2013. [The Oconee Enterprise reported on page A3 of its Nov. 19 edition that the roadway "could become a reality" within two years, but the right-of-way work is expected to take that long alone.]

The remainder of the Mars Hill road project, all of the Simonton Bridge road project and the Daniells Bridge Road Extension are listed as Tier II projects.

No money has been set aside so far for the second and third phases of the Mars Hill road widening or for the Simonton Bridge road widening, and both are designated as long range.

But the TIP includes $50,000 for preliminary engineering of the Daniells Bridge Road Extension in fiscal years 2014 and 2015 and indicates that construction will begin in 2017.

The Oconee County Board of Commissioners has chosen not to get involved in the priority listing of the county’s roadway projects in the MACORTS documents, though Commissioner Chuck Horton suggested at the Sept. 29 meeting that it would be a good idea for the county to take the Simonton Bridge road project off the list to avoid confusion.

Chairman Davis told Horton at that time that the county was engaged in discussions about the project with MACORTS.

At the Nov 24 BOC meeting, Horton asked Abe Abouhamdan, chairman of the Citizen Advisory Committee for Land Use and Transportation Planning, about the MACORTS process and "how roads get on that list."

"I’ll tell you one thing," he said. "If you have an idea of a road to be funded by the (Georgia) DOT or the federal government, do not hesitate to put it on the list, even if it is long-term."

He said if a project is on the plan "it will be seen" and if money becomes available for some reason, maybe because another project is cancelled, the state "could pull that project up" and fund it.

Watson, the Oconee County citizen representative on the MACORTS Policy Committee, is a member of the county Land Use and Transportation Planning Committee.

MACORTS held three public hearings on the draft TIP and accepted public comments from Sept. 21 to Oct. 21 via its website.

The report listed 17 distinct comments on the Simonton Bridge road widening, and not one of them was positive. The most common response was "I am against this project," which 27 individuals offered.

I have extracted the five pages of comments from the final TIP and put them on my web site.

The report lists 31 comments about the widening of Mars Hill Road. The most common response was "I do not support this project," given 25 times. One comment clearly supported it.

The report lists 25 responses on the Jennings Mill Parkway project, also called the Oconee Connector Extension. This project is funded and under construction. All 25 were "I do not support this project."

Of the 43 comments regarding Simonton Bridge Road, 27 were "I am against this project. It would ruin the character of downtown Watkinsville and significantly impact those living along the road." None were in favor of the project.

The report lists 27 comments on the Daniells Bridge Road Extension. Of those, 25 were "I do not support this project." None were in favor.
Posted by Lee Becker at 10:03 PM