Communication Was Terrible
Although the 2008-2009 budget approved by the Oconee County Board of Commissioners included $33,500 for the salary of Keep Oconee County Beautiful Commission Executive Director John McNally, the county actually paid McNally $35,175.
Oconee County Board of Commissioners Chairman Melvin Davis made the decision to give McNally the 5 percent salary increase, County Finance Director Jeff Benko told me on Dec. 11.
Though not in the budget, the cost-of-living increase was consistent with the contract under which McNally was working.
The amount of money spent by the county for McNally and the KOCBC became an issue last spring as the full commission discussed the 2009-2010 county bud 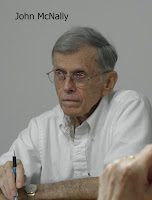