When Oconee County Board of Commissioners Chairman Melvin Davis gave John McNally, then executive director of the Keep Oconee County Beautiful Commission, a cost-of-living salary increase for fiscal year 2008-2009, he overshot the mark.

McNally’s contract called for him to be paid $33,500 plus "the annual cost-of-living adjustment" set by the Board of Commissioners for regular county employees.

The coat of living increase that county employees received for fiscal year 2008-2009 was only 2.3 percent, county 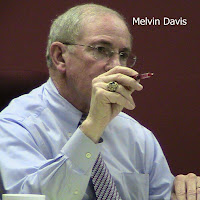 Administrative Officer Alan Theriault told me in an email message on Jan. 19.

Theriault wrote that he had confirmed that figure with the county’s Human Resources office before releasing it to me.

I asked Theriault and Benko via email for a confirmation of the cost-of-living rate increase for regular county employees when I filed an earlier report on McNally's salary on Jan. 17, a Sunday. The following day was a holiday.

The 2008-2009 budget approved by the Oconee County Board of Commissioners included $33,500 for the salary of McNally, yet the final expenditures for KOCBC showed that McNally had received $35,885.

I had obtained that budget as a result of an open records request I filed. When I met with Benko on Dec. 11 to review the budget, I asked him about the discrepancy between the $33,500 budgeted for McNally and the $35,885.

Benko told me that Chairman Davis had made the decision that McNally should receive a cost-of-living adjustment because other county employees had received one.

Benko subsequently told me that $710 of the $35,885 was not salary but a reimbursement to McNally for expenses associated with "disposal of tires."

Even at the higher level, however, KOCBC did not exceed the total amount budgeted for the office that year of $52,600. McNally spent only $7 of the $2,500 budgeted for travel, and only $522 of the $1,200 budgeted for education and training.

McNally, who turned 84 last year, chose to take the $12,000 and remain in his position through the end of October. The KOCBC voted on Oct. 5 to elect Esther Porter to serve as its volunteer executive director to replace McNally.

The KOCBC funding is part of the Public Works Department budget. When Public Works Director Emil Beshara presented his proposed budget for 2009-2010 to the BOC on April 15, he had eliminated the funding for McNally and the operation of the office.

Davis did not object to the budget request when Beshara presented it. At that time, Beshara reported directly to Davis.

At the June 23 meeting of the BOC, after a public hearing on the budget, Davis asked the Board to restore the full salary of McNally.

The three pointed out that members of KOCBC do a lot of fundraising and volunteer work and that the services provided KOCBC and its members would be badly missed if the organization were eliminated.

To promote recycling, KOCBC sells compost bins for $40 out of Porter’s American Building Products office on Industrial drive in Watkinsville. The office is open from 8 to 4:30 weekdays.
Posted by Lee Becker at 10:09 PM