The property formerly owned by Al Cuming and used by visitors to the historic Elder Mill Bridge for access to Rose Creek is under contract to be sold.

The sign by Grayson Realty, which is listing the property, carried the "Under Contract" designation on Saturday. 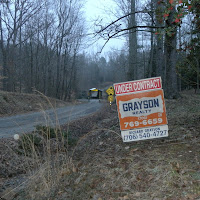 County activist Russ Page told me this afternoon that the person who has signed the contract to purchase the property called him yesterday to tell Page of the contract. The purchaser said he planned to live in the house on the 2.3 acre tract, Page said.

The parcel is just south of the historic wooden covered bridge over Rose Creek and contains the 220-foot path that leads to the creek shoals.

The 2.3-acre tract and the adjoining 23 acres currently are owned by James Flanagan of Athens, according to county tax records.

The 2.3 acres on which Cuming lived and much of the 23 acres that adjoin the Cuming tract are part of a designated county Scenic Preservation District.

According to the county code, a Scenic Preservation District is an “Overlay District” and “is comprised of land which in the best interest of the citizens of Oconee County should remain in a natural state as nearly as possible.”

The house on the 2.3 acres is not historic, having been built in 1972. County Planner Brad Callender told me when I visited his office on Jan. 15 that he did not know what restrictions, if any, the code might place on modifications to the house.

Page said he did not want to release the name of the buyer. Page said the buyer is traveling and told him that the closing is scheduled for Feb. 20.

I posted a story here on Tuesday evening and sent an e-mail note that evening about the listing of the Cuming property to Joe VanHoose, Oconee County reporter for the Athens Banner-Herald,.

In 2007, the county Parks and Recreation Department, working with Page and local land planning firm Williams and Associates, drew up a concept plan for a county park protecting much of the currently undeveloped land around the bridge and the mill, but the county decided not to take action on the proposal.

VanHoose, in his story, quoted County Board of Commissioners Chairman Melvin Davis as saying: “At that time, the funds weren’t available for the county to move forward.”

As I reported in a posting here on Monday, which I also sent to VanHoose, as of June 30, 2009, the county had $385,344 in unspent funds for Recreation and Cultural projects from its Special Purpose Local Option Sales Tax, which ended in September.

The county actually collected an additional $631,266 beyond the $25 million anticipated for the SPLOST and has an unspecified amount of interest built up over the five years of the SPLOST collections. At least some part of these monies could have been spent for the property.

But the county actually had much more money it could have spent for the Elder Mill park.

The SPLOST designated $5 million for parks and recreation projects, with the stipulation in the ballot language that some unspecified amount of that would be used for “the payment of a portion of a previously incurred general obligation debt of the County.”

The county chose to spend much of the $5 million to pay down the $12 million general obligation bond county voters approved in 2002 to purchase 196 acres for what is now the Oconee Veterans Park.

The county has never released detailed data on how the 2004 SPLOST funds were spent, so it is impossible to know exactly how the county spent the $4,614,656 of SPLOST money it did use for parks and recreations.

That would suggest the county spent $4 million for bond retirement, but the county could have chosen at any point to decrease that amount and use the money for purchase of additional park land.

SPLOST monies must be used for capital projects, such as land acquisition and building, rather than for maintenance and operation.

So Davis would have been correct in saying it was not the priority of the county to purchase the land, but it was not correct to say money was unavailable.

VanHoose’s story did not note that fact.
Posted by Lee Becker at 10:26 PM