As the Oconee County Land Use and Transportation Planning Committee continues its deliberations Tuesday about the future of the courthouse and the Board of Commissioners awaits the Committee’s report, 11.44 acres of land sit for sale literally at the courthouse doorstep. 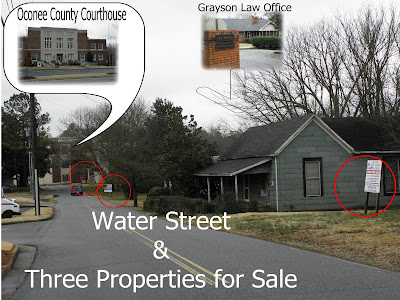 The asking prices for that land, which runs from the courthouse northwest toward the new jail, is just a little more than $2 million, according to Eddy Thaxton, who represents one of the sellers and checked with the other property owners to give me that price on Friday.
The assessed value on the tax records for these properties is $810,143.

As of June 30, 2009, the county was sitting on $4,281,944 in unspent and unallocated Special Purpose Local Option Sales Tax revenues dedicated to county facility expansion and renovation, including for the courthouse.

The Board of Commissioners voted last Tuesday night to spend $170,000 to renovate parts of the Government Annex building on Greensboro highway, which would reduce that figure to $4,111,944.

The county collected an additional $631,266 in SPLOST revenues before the tax expired with the November 2009 monthly collection and also has a yet unspecified amount of interest income from the tax.

If the $631,266 were allocated proportionately to the original categories, $116,153 would go to the courthouse and other facility projects.

The available properties are located on Durham street, Water street and North Third street, and anyone driving along Water street, a major access to the rear parking lot of the courthouse, has to pass three prominent signs touting the properties.

Thaxton said his property has been on the market for two years, and one of the others has been listed for more than a year.

Thaxton is with The Leader Real Estate Group, and he represents the family of Inez Christopher with three parcels totaling 5.15 acres at the corner of Durham and Water streets.

He told me on Saturday that he has talked to BOC Chairman Melvin Davis about the properties, but nothing has come of the discussions so far.

The BOC meets frequently in closed session, and land purchases are one of the topics the commissioners legally are able to discuss in secret. It is possible the properties have been discussed in those sessions. The BOC met in secret session as recently as Jan. 26.

Thaxton told me the asking price for his property is $1.1 million. The property runs all the way to Tanyard Creek, a tributary of Calls Creek, and contains two houses.

Two additional tracts lie between the Booth property and the courthouse. Helen Booth is listed as the owner of the tracts making up 4.34 acres.

These two tracts are listed by Oconee Properties, and Thaxton told me the asking price is $500,000. These properties also contain two houses, and the larger tract also runs to Tanyard creek.

The third property technically is not on the market, but Thaxton told me yesterday he talked with the owner and learned that it could be purchased with the others.

This 1.95-acre tract contains a house that is now used as a law office by Dennise Grayson and was formerly occupied by the Oconee County Planning Department. Thaxton said the owner, Leona Grayson, is asking $425,000.

The Land Use and Transportation Planning Committee has received briefings from county officials indicating that the county needs to dramatically increase the space available for both the court activities and the administrative needs of the county.

Courtroom safety has been mentioned as a prime concern, as has proximity to the jail on Experiment Station road.

County officials also told the Land Use and Transportation Planning Committee that the existing 5-acre parking lot is only adequate for current needs, meaning that space could not be used for future construction. That parking lot is adjacent to the Grayson law office building.

County officials meeting with the Land Use and Transportation Planning Committee also have quested whether the courthouse could be expanded by adding additional floors because of structural limitations.

At present, the county uses space in what is called the Courthouse Annex, which sits across Main street from the courthouse. That building, according to tax records, is owned by the Bank of America.

County officials have acknowledged that there has been some preliminary discussion of working with the Oconee County Board of Education on future office space needs.

Charles Williams is the president of North Georgia Bank.

Will-o-War also owns a 12.81-acre tract valued for tax purposes at $1,575,900. That property abuts the property sold to the Board of Education and also the land on which the county’s jail sits.

County officials discussed with the Land Use and Transportation Planning Committee the possibility of moving from the current courthouse site in central Watkinsville entirely, arguing that only the court functions need even to stay within the county seat itself.

The Land Use and Transportation Planning Committee is schedule to meet from 7 to 8 p.m. in the Community Center at Veterans Park on Hog Mountain road.
Posted by Lee Becker at 6:08 PM