In its seventh year, the Farmers Market is held behind the Eagle Tavern across from the courthouse in Watkinsville.

Also today, in nearby Harris Shoals Park, Robert Wyatt, adjunct professor of ecology at the University of Georgia, led about a dozen people on a stroll of the park and a discussion of the trees and shrubs they encountered.

The stroll, in its second year, is organized by Oconee Democrats as a fund-raiser. Each tour leader picks a charity, and participants make a $5 contribution to that charity. Wyatt chose the Oconee River Land Trust as his designated charity.

Next week, Steve Holzman, conservation chair of the Georgia Ornithological Society and a specialist with the U.S. Fish and Wildlife Service, will talk about birds. The stroll, which starts at 9 a.m. in the park, will benefit the Oconee Rivers Audubon Society.

The Keep Oconee County Clean and Beautiful Commission also used Harris Shoals Park today as the staging point for its Make Oconee Beautiful Cleanup, originally scheduled for April 24 and postponed until today because of rain. 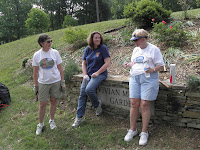 Participants reported on their efforts around the county to commission leaders Esther Porter and Mary Mellein, who were joined by Oconee County Commissioner Margaret Hale in doing cleanup work in the park itself.

A glass artist was showing her work, as was a soap maker.

The market will run every Saturday through the end of growing season. 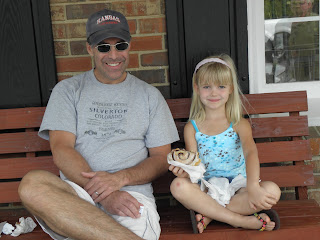 I took this photo at the porch of The Granary in Watkinsville today.
"Can I have another one?" she asked as I took this picture.
"Next week," was the answer.
Posted by Lee Becker at 2:02 PM