Radius Around a Line

Oconee County Board of Commissioners Chairman Melvin Davis didn’t attend the Northeast Georgia Regional Commission Advisory Committee meeting today, but his point of view about the designation of the Athens Line as a regionally important resource did.

Athens-Clarke County Mayor Heidi Davison reported Davis’ concern about protecting the rail line from detrimental development within a mile on either side of it, though she expressed no such anxiety herself.

Lee Carmon, planning director and general counsel for NEGRC, said she was aware of Davis’ reservations as well. Others in the room also acknowledged having heard from Davis about his problem with the rail line designation.

Joe Walter, mayor of Watkinsville and one of three Oconee County representatives on the NEGRC Council and its only representative on the Advisory Committee that selected the regionally important resources, chose not to comment during the discussion. 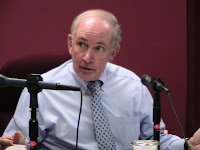 Davis (left), along with Amrey Harden, president and CEO of Oconee State Bank, and designated as a citizen representative of the county on the Council, and Walter will decide on Thursday whether to send the list of 25 resources designated as regionally important to the Georgia Department of Communication Affairs for review and comment.

The Council is the governing body of NEGRC.

That meeting will be begin at noon at the Holiday Inn in downtown Athens.

Elder Mill, Elder Mill Bridge, the Athens Line and the Apalachee River are the four resources from Oconee County designated by the Council back in April as regionally important in the first round of review.

At the meeting today at the NEGRC offices in Athens, Carmon presented a Resource Management Plan drafted by her staff following that April meeting.

The plan asks counties to take a series of steps to preserve the resources, including steering development away from them, coordinating new development patterns with those of existing neighborhoods, and preserving historic and cultural resources located on or adjacent to the sites.

Davison said that Davis was concerned that it was difficult to draw a one-mile radius around a line. The Athens Line, still partially used, runs from Athens to Madison.

Davison said it is no harder to draw a one-mile radius around the rail line than it is around a river. The Apalachee runs along the western border of the county.

At the BOC meeting back in March, when Carmon unveiled the list of Oconee County resources on the list, Davis expressed concern not about drawing the radius but about the restrictions such a designation might place on development in Oconee County.

Carmon said today that NEGRC would review any development within a mile of the designated resource, but the report NEGRC would release would be only advisory.

Back in 2008, NEGRC planners negatively reviewed the large Epps Bridge Centre shopping mall planned for Epps Bridge Parkway behind Lowe’s, citing traffic and environmental concerns. The county ignored that assessment and rezoned the property for development.

And just last week the Board of Commissioners ignored a land use map it passed only two years ago to spot zone a piece of property in the rural southern part of the county for a waste transport facility.

At the April 15 meeting, Davis held his voice, but Davison and Carmon indicated he has not done so in private conversations.

Carmon said critics could work to get any of the four resources taken off the list when the next round of resource review starts later this year.

County officials did not nominate any county resources as regionally important in this first go-around.

The Apalachee River, as a water resource, was included automatically and was listed as a resource for Barrow, Greene, Morgan, Oconee and Walton counties.
Posted by Lee Becker at 8:26 PM

I just happened to have walked a few hundred yards of this railroad line today. Two parallel rail pairs, both needing at least half the crossties replacing, and a de-railer putting one out of use. Somehow I fail to see the excitement, time, effort, and expense over an old rail line. Apologies to the avid cyclers, whose sport pays nothing to help fund itself on the highways.

Last time I checked, cyclists pay taxes just as you do, Xardox. They just happen to use bikes on the road instead of cars from time to time.

The rail line could make a nice multi-use path someday if the corridor is preserved and is no longer commercially viable.

However, it could also be an important asset for businesses in the industrial area of Watkinsville and that use must also be considered.

Sorry Xardox, but rails to trails in other parts of the US have had many benefits to the communities around them. They bring people to exercise as walkers, bikers, horse riders. They bring events for each of these groups which brings more people to the area. And they keep us healthier through exercise. A connection between historic Madison and all the nice little restaurants in downtown Watkinsville would be a real plus for hikers and bikers.

Xardox, drop the tired old line of not paying taxes. It is inaccurate and thick-headed. Look around at the number of roof and trunk bike racks on all those Oconee vehicles.

And one more thing, if you are going to constantly make comments, drop the anonymity and use your real name. Stop hiding.

The rail line as a future bike or walking path makes sense. Does marking it as "regionally important" or whatever is going on here do that? Further, bottling a mile "radius" seems excessive.

Tony emerges from a wetland to go ad hominem. Cool. Dealing with his ilk is much easier than thinking. I have heard bicycling is good anger therapy, so keep peddling, before you make a fool of your cause rather than just yourself.

I have an answer about my name but Dr. Becker wouldn't allow it to stay here.