Going from Three to Four


That was the question before the Oconee County Citizen Advisory Committee on Land Use and Transportation Planning last week as it considered what action to recommend to the Board of Commissioners regarding the Northeast Georgia Plan for Bicycling and Walking.


How about to “acknowledge”?


After lengthy discussion at its regular meeting on Feb. 8, the Committee voted 9-2 to recommend to the BOC that it “acknowledge” the statewide plan when the issue comes before it for consideration in the next few months.


The Northeast Georgia Plan for Bicycling and Walking was developed by the staff of the Northeast Georgia Regional Commission in collaboration with its Regional Bicycle and Pedestrian Task Force and is designed to increase the safety and prevalence of walking and bicycling. 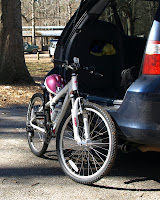 The biking and walking plan is advisory, regardless of what language the BOC uses in reference to it. NEGRC has no enforcement authority.


The Land Use Committee took up the issue at its regular February meeting after having decided back in November that it needed more time to decide what word the BOC should use when it considers the NEGRC plan.


Debate about the proper word to suggest to the BOC again occupied the Feb. 8 meeting, according to the draft minutes and to Angela Helwig, the county staff member who serves as recording secretary for the Committee.


I could not attend the meeting because it overlapped the Board of Commissioners meeting that same night. Helwig gave me the minutes shortly after she had prepared them last Thursday afternoon.


She told me–and the minutes confirm–that I was not the only citizen who missed the Land Use Committee meeting. In fact, no citizens (other than Committee members) and no journalists were in attendance.


NEGRC included two sample endorsement resolutions as part of the appendix to the bicycling and walking plan.


In one, Oconee County would endorse the plan. In another, the county would adopt the plan.


Wayne Provost, director of Strategic and Long-Range Planning for Oconee County, offered the Committee a third resolution back in November.


Rather than endorse or adopt the plan, Provost suggested the county merely recognize the plan.


Provost’s rewrite also modified a reference in the NEGRC resolution to a “need to promote non-motorized transportation options to improve air quality and public health.”


Provost’s resolution said instead that the county “recognizes the potential for non-motorized transportation options to improve air quality and public health.”


According to the draft minutes, Committee member Chris Herring suggested that the BOC should not respond to the NEGRC other than to thank it for its work, but Committee Chairman Abe Abouhamdan pushed for action on the proposed resolutions.


James Morris was the Committee member who suggested that Provost’s resolution be modified to replace “recognize” with “acknowledge.”


According to the draft minutes, he said the county can “amend or upgrade the status” of the plan in the future “after considering the input of Oconee County citizens.”


Following the vote, Herring said he wanted Provost’s resolution forwarded to the BOC along with the Committee’s revision.


Provost told the group that the BOC already had copies of the two NEGRC resolutions and his, so the new one with the switch from “recognize” to “acknowledge” would simply be a fourth.

Unfortunately I wasn't able to attend this meeting. Part of me regrets not witnessing the discussion. The other part of me is grateful.

I'm curious....was there any discussion on the definitions of "recognize" versus "acknowledge"? That could have been entertaining.