Party Labels Up for Grabs


Secretary of State Brian Kemp today set May 16 to 18 as the qualifying dates for the special election for Georgia State House District 113, which includes all of Oconee County.


No primary will be held. Candidates who file and qualify can simply designate a party label to follow their name. Candidates also can decide to label themselves as Independent or run without any label.


Qualifying will begin at 9 a.m. on May 16 and run through noon on May 18. Candidates must live in the district, which, in addition to Oconee County, contains parts of Clarke, Morgan an Oglethorpe counties, and pay the $400 filing fee.


The election will be held on June 21, with a runoff on July 19 if no candidate gets more than 50 percent of the vote in the June 21 election.


The General Assembly is expected to go back into session on Aug. 15, with the primary task of redistricting the state based on the 2010 Census.


The composition of the 113th will be up for consideration, and Oconee County could lose its status as the dominant county of the district. Oconee County has not been split into more than one House district since the election of 2002.


At present, the district consists of 25 precincts, with 13 of them coming from Oconee County. Based on the 2000 Census, 58.0 percent of the population of District 113 resides in Oconee County, with 23.6 percent in Clarke, 12.1 percent in Oglethorpe and 6.4 percent in Morgan.


One insider familiar with the districting process told me over the weekend in an informal conversation there is likely to be considerable pressure in August to create a more Republican district for Doug McKillip, who was elected to the 115th District in November of last year as a Democrat and then switched to the Republic Party.


The 115th, one of two districts entirely in Clarke County, abuts Oconee County, and the insider told me Oconee could easily be carved up to give McKillip more Republican voters.


Hank Huckaby, elected to the 113th as a Republican last November, resigned because he is line to become the chancellor of the University System of Georgia.


Huckaby, who lives in Oconee County, told me in an email exchange over the weekend he resigned on Friday to make it possible for the county to hold the election on June 21. Gov. Nathan Deal on Friday called the special election.


Also on Friday, Chuck Williams, former president of North Georgia Bank, told The Oconee Enterprise that he will run for the 113th seat in the special election. 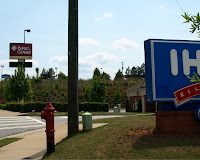 And the following day Oconee County Board of Commissioners Chairman Melvin Davis, who had been considering running, told the Enterprise he had decided not to run. The paper updated the story accordingly.


Williams and Davis have been close politically and are serving together on the Oconee County Industrial Development Authority.


Williams’ announcement and Davis’ response means the county will not have to hold another special election to replace Davis this summer. Davis would have had to resign as BOC chairman to run for the House seat.


Williams will run with two liabilities.


The Georgia Department of Banking and Finance in early February closed North Georgia Bank and turned it over to the Federal Deposit Insurance Corporation as receiver.


Williams was founder of the bank and president during its 11-year history.


In addition, Williams and his brother sold property in Watkinsville at above-appraised value to the Oconee County Board of Education for future use for an administrative facility. That decision has proven to be controversial in the county.


In a move that has generated little media attention locally, the FDIC on Friday closed another bank with a branch office in Oconee County. Another Voice from Oconee County reported the development over the weekend.


The Georgia Department of Banking and Finance closed the Park Avenue Bank, Valdosta, and appointed the FDIC as receiver.


Bank of the Ozarks, Little Rock, acquired the banking operations, including all the deposits, of the Valdosta bank plus a second Georgia bank, First Choice Community Bank, Dallas.


The Oconee County branch of Park Avenue Bank was on Epps Bridge Parkway, near IHOP. Over the weekend, its name was wrapped in the new signage for Bank of the Ozarks, bringing back memories of the quick disappearance of North Georgia Bank.


Huckaby also told me on Saturday that he intends to resign from the Hard Labor Creek Reservoir Management Board, on which he is serving as the Oconee County citizen representative. That Board is overseeing the construction of the reservoir in Walton County on behalf of the two partnering counties.

An interesting bit of jockeying for a seat in the reapportionment process this summer, along with setting up a very interesting election season for 2012.
Plenty of time for more names to surface from the rumor mill.

Just a note of clarification: Blake Giles is not active in the Oconee County Republican Party. He lives in Clarke County and has only been to one of our meetings: the June 2010 candidate forum, which I asked him to moderate.