University Likely To Get Land


A joint House-Senate Conference Committee last night agreed on an agricultural funding bill that makes closure of the J. Phil Campbell Sr. Natural Resource Conservation Center outside Watkinsville nearly certain and provides for conveyance of its property to a land grant institution such as the University of Georgia.


The bill includes less money for the Agriculture Research Service, of which the Campbell Center is part, than President Barack Obama requested.

Obama had identified 10 research centers around the country, including the Watkinsville facility, as ones to be closed to make his budget request work. 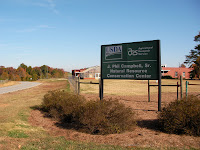 The House of Representatives is expected to take up the bill later this week and send it to the Senate for action.


Neither the House nor the Senate will be able to strike or add provisions to the bill, according to
Alison Thigpen, a member of Georgia’s First District Representative Jack Kingston’s staff.


Thigpen told me in a telephone conversation this morning she expects the House to vote on the bill on Thursday.


Kingston was a member of the conference committee and chaired the House Committee on Appropriations Subcommittee on Agriculture that drafted the House version of the bill that included the conveyance provision.


Kingston, a Republican from Savannah, grew up in Athens and attended the University of Georgia. He is generally considered a friend of the University.


Dean J. Scott Angle of the UGA College of Agricultural and Environmental Sciences, told me in a telephone conversation in late March that the University is interested in the Campell Center land if the land becomes available. Angle lives in Oconee County not far from the Campbell Center.


The Conference Committee report covers what is being called a “Mini-Bus” Appropriations Bill, as opposed to an omnibus bill.


The bill provides funding for Fiscal Year 2012 for Agriculture, Commerce/Justice/Science, and Transportation/Housing and Urban Development.


The fiscal year for the federal government began on Oct. 1 without agreement on a budget, and funding has been authorized by a continuing resolution that set spending for the 2012 Fiscal Year at 2011 levels. That resolution expires on Nov. 18.


The package reported out by the Conference Committee last night also contains another continuing resolution to avoid a government shutdown and continues other federal operations until December 16, 2011, or until Congress completes the remaining nine FY 2012 Appropriations bills.


All but one of 38 House and Senate conferees agreed to the package that includes fundings for the three areas of the government and the new continuing resolution. Sen. Richard Shelby, Republican of Alabama, was the lone dissenter.


The Senate version of the bill did not include the conveyance clause written by Kingston’s committee and approved by the House.


Without that conveyance, which was reinserted by the Conference Committee, the Campbell Center land would have been turned over to the General Services Administration for disposal.


The University of Georgia still might have been able to obtain the land, but it would have been a more complex process.


The bill approved by the Conference Committee says that “The Secretary of Agriculture may close up to 10 facilities of the Agricultural Research Service, as proposed in the budget of the President for fiscal year 2012 submitted to Congress.”


It also says that “the Secretary of Agriculture may convey, with or without consideration,
all right, title, and interest of the United States in and to any real property, including
improvements and equipment thereon, of the facility to an eligible entity.”


As a condition for accepting the property, the recipient must be located in the same state as the ARS facility and “agree to accept and use the property for agricultural and natural resources research for a minimum of 25 years.”


Edward B. Knipling, ARS administrator, in his March testimony before the House, said he proposed cutting $58.8 million from existing ARS programs.


“Difficult choices were made to identify these reductions,” he said. “In this regard, ARS systematically reviewed and evaluated programs using a number of criteria, such as their priority within the agency; whether they were viable and sustainable based on current funding; and whether they lacked critical mass for an effective program.”


The Campbell Center was started on Jan. 1, 1937, to conduct research and develop procedures to deal with soil erosion.


The Center’s 1,107 acres are divided into four tracts.


Just fewer than 610 of those acres are in the middle of the most densely settled part of the county east of Butler’s Crossing and north of Watkinsville.


And 245 of those acres are across Hog Mountain Road from the Civic Center, which is the part of the county undergoing the most rapid change before the current economic downturn hit.


Only 252 of the acres are in the southern, largely agricultural part of the county.


The University of Georgia is in the process of closing its Plant Sciences Farm on Hog Mountain Road in the western part of the county.


Sandy Miller Hays, director of the information office of the ARS in Beltsville, Md., told me on Tuesday of last week that on Dec. 5 ARS will open buy-out and early retirement options to eligible employees.


She said that all “displaced employees” will be offered other employment options should the Center close as proposed.


On Monday, Stephen Norris, a research technician at the Campbell Center, sent out an email message to scientists at ARS South Atlantic Area locations offering them “surplus equipment and materials” from the Campbell Center. Someone forwarded the email to me.


Those interested were asked to visit a link on the ARS web site to “see photos and descriptions of the various items we have available for transfer.”


Norris told me today in a telephone conversation that the inventory is made up of “old equipment we haven’t even been using” at the Campbell Center.


He said scientists who are transferred to other locations probably will take some of the equipment they are using for their research with them.


The email message promises that there will be “lots more to come!”


“It has to go somewhere,” Norris said today.

What a poor decision by the Obama administration.