Oconee County Commissioner John Daniell plans to ask his colleagues tomorrow night to begin the process of changing the enabling legislation that defines the government structure in the county.

He wants the Board of Commissioners to gain control over how salaries for the commissioners are determined.


He also wants all five commissioners to vote on all issues. 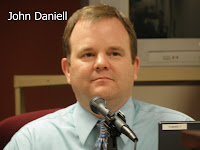 And he wants to create a single piece of enabling legislation for the county.


If Daniell is successful in persuading his colleagues to support his initiative, the BOC will ask County Attorney Daniel Haygood to start working on a legal document to submit to the Georgia General Assembly when it meets next year, Daniell said to me in a telephone conversation today.


Daniell has been talking about changes in the enabling legislation for the county almost since he was elected in 2008 and proposed at the Oct. 25 meeting that the commissioners take up the matter at tomorrow night’s session.


The item appeared on the agenda released by County Clerk Gina Lindsey on Wednesday of last week.


Daniell said that he wants to “give Daniell (Haygood) instructions to move forward in writing up legislation” that will be presented to Sen. Bill Cowsert and Rep. Chuck Williams for introduction to the General Assembly.


Cowsert and Williams represent Oconee County in the General Assembly. Generally legislators defer to local representatives on legislation of a purely local nature.


Unlike in many states, Georgia’s constitution does not specify the form of local government. How governments operate is determined by enabling legislation passed by the legislature.


The enabling legislation in force for Oconee County was passed in 1917, but it has been modified piecemeal a number of times since then.


In 1994, a modification to the legislation set compensation for the salary of the chairman of the BOC at two-thirds of the highest base salary paid by the county to the sheriff, probate judge, tax commissioner or clerk of the Superior Court.


The salaries of the other four members of the BOC were set at 20 percent of the highest salary paid to these four constitutional officers. Their salaries are set by the state.


Commissioners also receive, according to the legislation, an additional 5 percent added to their salaries for each four-year term served.


Those formulas put the salary for Chairman Melvin Davis at more than $90,000 and for the other four commissioners at about $20,000. Davis serves in a full-time capacity.


Daniell wants those salaries to be set by the BOC itself with an open vote, he said to me in an email message last week.


At present, Chairman Davis votes only in the case of a tie. Daniell wants the chairman to vote on all issues.


At present, the county provides copies of the 1917 enabling legislation and all of the modifications to citizens requesting information on county governmental structure.


A consolidated document would make that unnecessary.


Daniell told me today he is “open to suggestions” about changes other than the three he has proposed in the enabling legislation, but that the three changes he has proposed are what has motivated to push for action at this time.


The meeting starts at 7 p.m. at the courthouse in Watkinsville.