Following the election in Florida on Tuesday, attention will shift significantly to March 6--Super Tuesday-- when Georgia joins six other states in holding presidential primaries.


Barack Obama will be the only name on the Democratic ballot, but the Republican ballot includes the names of nine candidates or former candidates, including the four leading in the polls today nationally and in Florida.

Given the way delegates are selected, Oconee County voters–who have a history of going to the polls in high numbers–will have impact on the outcome. 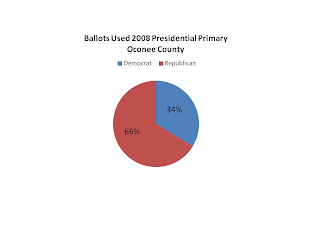 Since the primary is open to anyone who is registered by Feb. 6, citizens in the county 18 years old or older who want to vote in the Republican primary can.


Bachmann, Huntsman, and Perry have ended their campaigns. Johnson, former governor of New Mexico, is no longer seeking the Republican nomination but wants to run as the Libertarian Party nominee.


Roemer, former governor of Louisiana, is still campaigning, though all the attention is on Gingrich, Romney, Santorum and Paul.


The 76 Georgia Republican delegates to the Republican national convention are allocated in a complex way.


Voters in each of the newly created 14 Congressional Districts in the state will select three delegates, for a total of 42. 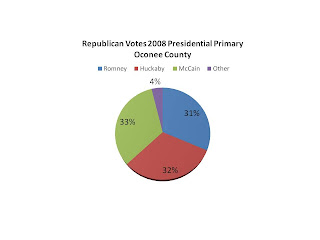 If a candidate receives more than 50 percent of the vote in a district, the candidate gets all three delegates.


Oconee County is part of the new 10th District, which extends south to Johnson County and includes the northern suburbs of Augusta.


From the 76 delegates, 31 are allocated proportionately among the contenders who receive at least 20 percent of the vote statewide.


The three remaining delegates are for party leadership and are bound to the candidate receiving the most votes statewide.


Given the up-and-down nature of the Republican primary campaign so far, Georgia’s 76 delegates could be important when the party holds its convention from Aug. 27 to 30 in Tampa.


To date, only 59 of those delegates have been allocated, with Gingrich in the lead.


Only 50 delegates will be selected in the primary on Tuesday, rather than the 99 Florida should have been selecting. The Republican National Committee removed the other delegates after the state moved the primary forward. The winner will get all of the 50 delegates.


Missouri, Arizona and Michigan will hold primaries before the March 6 Super Tuesday contest, but the Missouri primary will not select delegates.


Joining Georgia voters on March 6 will be voters in Massachusetts, Ohio, Oklahoma, Tennessee, Vermont and Virginia. Alaska, Idaho and North Dakota will hold caucuses on that day.


Oconee County’s voters have gravitated toward the contested elections in the past. Their record of going with the eventual winner of the presidential primaries has been pretty good.


In 2008, when both parties had contested primaries, 48.6 percent of Oconee County’s 20,264 registered voters turned out on Feb. 5 for the presidential primary, with 66.3 percent voting in the Republican race.


Obama won on the Democratic side in Oconee County and eventual nominee John McCain won on the Republican side, though Mitt Romney got nearly a third of the vote and was a very close third.


In 2004, when only the Democratic Party had a contested primary, 3,436 voters cast a ballot in Oconee County, with 70.7 percent of those in the Democratic primary. John Edwards got 54.1 percent, and eventual nominee John Kerry got 37.3 percent.


In 2000, in Oconee County 4,600 voters cast ballots in the presidential primary, with 81.5 percent on the Republican side.


Eventual Democratic nominee Al Gore got 76.0 percent of the vote against the sole rival, Bill Bradley.


On the Republican side, eventual nominee George W. Bush got 54.2 percent against five rivals.


The March 6 Presidential Preference Primary will be the first time Oconee County voters will participate in an election in one of the districts created in the special legislative session of the Georgia General Assembly last August.


Citizens now are represented by someone elected in the old districts but vote in the new ones.


The U.S. Department of Justice gave approval to the districts on Dec. 23.


Early voting for the March 6 primary will be from 8 a.m. to 5 p.m. on weekdays Feb 13 through March 2 at the Board of Elections office at 10 Court Street in Watkinsville. Voting also will be possible at that office from 9 a.m. to 4 p.m. on Saturday, Feb. 25.