Oconee County was sitting on $5.7 million in unspent money collected from the 2004 Special Purpose Local Option Sales Tax as of June 30 of last year, according to the required report on SPLOST spending filed by the county at the end of 2011.


The county currently is spending revenue from the current SPLOST approved by voters in March of 2009, according to the report.


As of the June 30 date, however, the county had not spent any money from three categories, for Recreation, Historic and Scenic Facilities, for Fire Station Facilities and Equipment, and for Farmland Protection.

The ballot language approved by voters specifies that the county is required to spend 3.2 percent of the collected SPLOST revenue for Recreation, Historic and Scenic Facilities, or a projected $1.1 million across the six years of the tax.


Fire Station Facilities and Equipment must account for 11.4 percent of revenue, or $3.9 million if the projected $40 million in tax receipts are achieved.


The county must spend $0.5 million for Farmland Protection, or 1.5 percent of the collected revenue. 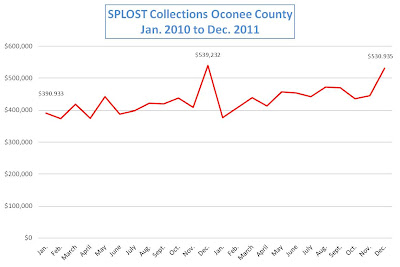 The Board of Commissioneres did vote to spend $111,000 at its Dec. 6 meeting from the Farmland Protection funds to protect from development a portion of the Powers farm on Colham Ferry Road.


The county also has spent $240,000 on a new roof for the courthouse from the 2004 SPLOST revenues, according to County Finance Director Jeff Benko, and that amount, too, will be reflected in next year’s report.


The county is required to file the SPLOST spending report at the end of the calendar year, and this year’s report appeared on page A5 of the Dec. 22 issue of The Oconee Enterprise, the designated legal organ in which the county must publish such documents.


The paper did not run any story about the report in that or the subsequent paper, and the report has not been the subject of analysis in the other media.


The SPLOST report was part of the budget documents reviewed by Treadwell, Tamplin and Company, with offices on Daniells Bridge Road, for the audit of the county’s records from the last fiscal year. That report was released last month.


The SPLOST report, on page 67 in the audit, is a slight modification of the one appearing in the Enterprise.


The county was found by the audit to be in compliance with financial procedures.


The largest unspent category from the 2004 SPLOST is for County Facilities, Expansion and Renovation, where the report shows $4.6 million allocated and only $534,413 spent.


The referendum language limits spending from this category to “the acquisition, construction, equipping and installation of expansions of the County Courthouse, the County Government Annex Building, County Libraries, and the County Code Enforcement Office, all to be owned and operated by the County, including the acquisition of all property, both real and personal, necessary therefor.”


The roof replacement falls into that category, Benko told me when I met with him on Feb. 1 to review SPLOST spending. He estimated that only $3.7 million is unspent from this category at this time.


The Board of Commissioners has gone into executive session frequently in recent months, often to discuss land acquisition, and it is possible these discussions focused on the courthouse.


After the Jan. 3 regular meeting, the BOC adjourned into executive session to discuss land acquisition and litigation matters, according to the minutes.


It had a called meeting on Jan. 19 and immediately went into executive session. Again, the minutes indicate the discussion was on land acquisition and litigation.


After the Jan. 24 meeting, the BOC again went into executive session to discuss, according to the minutes, litigation, personnel and land acquisition matters.


And after the most recent meeting on Feb. 7, the BOC went into executive session to discuss, according to the minutes, land acquisition and potential litigation matters.


The minutes do not reflect how long the board is in executive session or who among the staff joins in the discussions.


The state’s open meetings laws allows the BOC to hold executive sessions only for litigation, discussion of personnel matters dealing with the appointment or evaluation of a “public officer or employee,” and land acquisition.


The county spent quite a bit of time in 2010 discussing the future of the courthouse, but little has been said publicly since that time.


The SPLOST Report released at the end of the year shows that the county spent a total of $1.1 million from the 2004 SPLOST in the fiscal year ending June 30, 2011, with most of that being spent for water and sewer improvements and roads.


Even with that spending, the county has spent only $5.1 million of the $6.6 million budgeted for water and sewer improvements in the revised budget allocation for the 2004 SPLOST funds.


The report provides only the amount of spending in the categories specified in the referendum. It does not provide details of the spending within those categories.


According to the report, the county spent $6.7 million in the fiscal year ending on June 30, 2011, from the 2009 SPLOST, with $2.9 million of that for towers and other communication infrastructure improvements for fire, public safety and other county uses.


The report shows that the county spent $1.2 million on county road projects and repair.


The county spent only $14,800 on water and sewer projects, though 19.8 percent of the total revenue from the SPLOST is allocated to water and sewer improvements. Benko said the spending in the last fiscal year was for the Lampkin Branch sewer line upgrade now underway near the county jail.


The 2009 SPLOST, unlike earlier ones, allocated part of collected revenue to the four cities in the county. The county disburses that money by a formula approved in the SPLOST referendum.


The 2004 SPLOST was projected to collect $25 million, but the law allowed it to run through the quarter in which that amount was reached, resulting in excess collection. The county also has invested the money collected but not spent, resulting in additional revenue.


The result is that the current 2004 SPLOST budget is for spending of just less than $26.1 million, rather than the original $25. But the spending figure is not fixed, as the county continues to earn revenue from investments of the unused funds, Benko said.


Benko has reduced spending from the 2009 SPLOST to 80 percent of the projected annual amount, reflecting the weakness of the economy and low level of collections in the last two years.


The county collected only $390,933 in January of 2010, based on data I downloaded from the Georgia Department of Revenue.


Revenue collection grew to $539,232 in December of 2010 and fell again after the holiday season.


Revenue collections are delayed by a month, and I made that adjustment in the chart above so that the amount reported is for the actual month of collection, not distribution.


The $40 million expected total for the 2009 SPLOST will be reached if the county collections average $555,000 per month across the 72 months of the tax.


Benko said he still believes that will happen, as monthly revenues are moving in the right direction.


“If we get development out there on Epps Bridge, the last two years it will be above $550,000,” he said. “So it is not inconceivable that we will reach it.”

Those "frequent executive sessions" are probably going to come to a close as new state laws clarify what allows closed executive sessions. Also, question: why continue to collect SPLOST if funds are sitting in the bank eight years later? Guess those projects were not very urgent. Why not designate SPLOST to projects that are now paid for by property taxes, and give us a PROPERTY TAX BREAK????

Tghis is insane. Why should we trust our elected officials to properly spend our SPLOST tax dollars when they are sitting on millions from almost ten years ago??!!