Only 27.7 percent of the registered voters in Oconee County turned out for the March 6 Presidential primaries, down from 48.6 percent four years ago, the official Statement of Votes Cast filed by the county Board of Elections and Registration office late last week shows.


Almost all of the votes cast—97.7 percent—were in the Republican primary, but even Republicans showed limited interest in the race.

The number of Republican ballots cast on March 6 was 821 fewer than in 2008, although the county has more registered voters this year.


The number of Democratic ballots cast was down 3,178 from four years earlier.


Because the primaries are open, meaning any registered voter can vote in either of the primaries, some of those who voted Democratic in 2008 switched to the Republican Party ballot this year.


That makes the difference between Republican voting levels in 2008 and in 2012 even more striking.


An analysis of voting in each of the 13 precincts in Oconee County suggests that cross-party voting probably was not extensive.


The 2008 election serves is a reasonable benchmark for analysis of the 2012 voting. 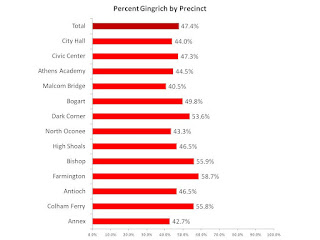 On the Republican side, the names of Mike Huckabee, John McCain, Ron Paul and Mitt Romney, among others, were on the ballot, and McCain had not yet wrapped up the nomination when Georgians voted on Feb. 5.


In the end, McCain won in Oconee County, but he was just ahead of Huckabee and Romney.


On the Democratic side in 2008, the names of Hillary Clinton, John Edwards and Barack Obama, as well as others no longer active, were on the ballot.


Oconee County voters in that primary favored Obama, but they also gave strong support to Clinton, who remained a strong contender.


In 2008, Oconee County had 20,264 registered voters, according to the records of the Georgia Secretary of State Elections Division. Of those, 9,485 cast ballots, with 6,530 using the Republican ballot and 3,315 using the Democratic ballot.


Only President Barack Obama’s name was on the Democratic ballot.


Oconee County had 21,076 registered voters at the March 6 election date. Of those, 5,846 cast ballots, with 5,709 using the Republican ballot and only 137 using the Democratic ballot.


The County had another 1,973 inactive voters, Carole Amos in the county board of elections office told me in an email message yesterday. These are voters who had not voted or otherwise confirmed their registration for three years but were still eligible to vote.


I compared voting in 2012 in each of Oconee County’s 13 precincts with voting four years earlier to examine the pattern of decline in voting in each of the two party primaries.


In no precinct was there an increase in Republican voting, which likely would have been the case if those traditionally voting Democratic switched in large numbers to vote in the Republic Primary.


In each of the 13 precincts, there were big declines in the number of persons casting a Democratic ballot. 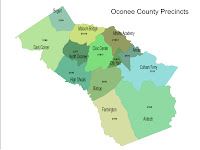 The importance of the 2008 presidential primary as a benchmark of partisan orientation of Georgia voters is indicated by its use by the legislature last year during redistricting. It was one of the elections used to create Republican districts such as the new 117th now the home district for incumbent Rep. Doug McKillip.


Gingrich won the election in Oconee County on March 6, with 47.4 percent of the vote overall.


His vote percentage, however, varied considerably across the county’s 13 precincts.


Romney, who came in second with 26.0 percent of the vote, did best in Athens Academy in the northeast of the county and worst in Farmington.


Santorum, who came in third with 19.1 percent of the vote, did best in North Oconee in the west of the county and worst in Athens Academy.


Paul, who had 7.0 percent of the vote, did best in Colham Ferry in the east-central part of the county and worst in Dark Corner in the far west.


The Statement of Votes Cast reports separately the outcome of early voting and of voting on election day itself, giving a hint of any change in voter sentiment in the final days of the campaign. Early voting ran for 15 days, ending on March 2.


Early voting was a significant part of the election, with 1,076 votes cast that way, or 18.4 percent of the total.


First, those votes were counted as part of the votes in the new Congressional District 10, which includes Oconee County. 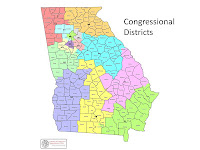 Second, the votes were counted as part of the state-wide totals.


Each of the state’s 14 districts controlled the allocation of three delegates. At present, tallies of votes by Congressional District are still not complete, according to the Secretary of State Election Division web site.


At issue is allocation of votes in those counties that are in more than one Congressional District.


Parts of Clarke, Columbia, Gwinnett, Henry, Newton counties, but not all, are in the 10th District.


The preliminary figures, minus the votes from these counties, show Gingrich getting more than 50 percent of the votes in the 10th District. If those figures hold, he would get all three of the delegates from the 10th.


If no candidate got more than 50 percent of the vote in a Congressional District, the candidate getting the most votes got two delegates and the second candidate got one, according to Republic Party rules.


Based on the results released to date, the final tally for the 42 delegates allocated by district would be Gingrich (31), Romney (8) and Santorum (3).


Of the remaining 34 delegates, Gingrich would get 23 and Romney would get 11.


Santorum, with 19.6 percent of the vote, and Paul, with 6.6 percent, did not clear the hurdle of 20 percent required by party rules for receipt of the 31 at-large proportional delegates. Three delegates went to Gingrich as overall winner.


My calculations match those of The Green Papers, which is tracking delegate counts for the primaries.


How Georgia’s open primary rules and the lack of a real contest on the Democratic side affected these outcomes at present isn’t possible to know.


Across the state, 901,470 votes were cast in the Republican primary and only 139,273 were case in the Democratic primary.


The Secretary of State office will release at a later date records of which ballot individual voters throughout the state selected for the March 6 primary. These records are required as part of the transparency needed to guarantee fair elections.


In the past, I have downloaded these complex files and used them in my reporting.


The political parties and their consultants regularly use these data in their campaigns to target likely voters.


The ballot requested by voters actually voting on March 6 was not recorded locally except by name, according to Pat Hayes, chair of the Oconee County Board of Elections and Registration. Only the Secretary of State has a file with the voter registration number, she said.


The names and registration number of those voting early was recorded locally, however, and I requested a copy of that file.


These records show that Ann Hudson Stoneburner, chair of the Oconee County Democratic Committee, voted in the Presidential Preference Primary--using a Republican ballot.


So while the precinct data suggest cross-party voting was not extensive, the early voting records indicate at least some such voting did take place.

As of earlier this evening, Ann resigned her post as chair of the Oconee County Democratic Committee and I resumed my duties as chair