Pond in Herman C. Michael to be Drained


John Gentry, director of the Oconee County Parks and Recreation Department, last week gave members of the Board of Commissioners the first view of a proposed spending plan for funds being collected as part of the 2009 Special Purpose Local Option Sales Tax.

Most of that money for Veterans Park–$495,000–will go to development of adult softball facilities. 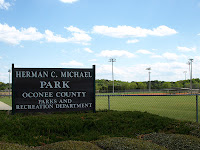 The tax had set aside $1.1 million for that purpose, but Gentry’s budget is for $880,000 because tax receipts are lower than what was projected when the tax was passed in March of 2009.


The 2009 SPLOST language included a separate “Recreational Facilities” category and designated $4.8 million to pay debt on the bond used to finance purchase and construction of Veterans Park.


That money is being spent for that purpose.


Gentry gave his proposal to the BOC last Wednesday as part of his budget presentation for Fiscal Year 2013, which begins on July 1.


Gentry presented a $2,103,109 budget request for the Parks and Recreation Department, up 1.7 percent from the current budget of $2,067,744. The SPLOST spending is not a part of that budget.


The BOC isn’t expected to take final action on the county’s budget until the end of May.


Gentry is proposing to spend $450,000 in SPLOST funds from the 2009 “Recreational, historic and scenic facilities” category in the coming fiscal year. Up to this point, no money has been spent from that category.


Included in that improvement is completion of the grading, installing a parking area, completion of a walking path loop, and installation of an irrigation system. The lighting already is in place.


Gentry also proposes to do $50,000 in renovation to the pond at Herman C. Michael Park. The park will be drained this summer and dredged in early fall.

Another $10,000 will go toward recoating of the tennis courts at Herman C. Michael, and that same amount will go to repair of the walking path in the Bogart Sports Complex.


Finally, $75,000 will be spent on field renovations at the Bogart Sports Complex and at Oconee Veterans Park.


The budget Gentry gave the Commissioners lists $130,000 in SPLOST spending in Fiscal Year 2014, with $100,000 of that going to Oconee Veterans Park. Included are the softball facilities, recoating of the tennis courts and replacement of dead trees.


In the final year, Gentry proposes to spend $190,000, with $50,000 for a precast restroom in Heritage Park and the remainder going to the softball fields at Veterans Park.


Heritage Park is the home to a nascent History Village, including an old school house moved to the site.

I agree with your underlying point. Some percentage of the set-aside should be used to develop scenic and historical venues.