Oconee County Board of Commissioners Chairman Melvin Davis stands alone at present among county governmental and business leaders in his stated support for the Transportation Special Purpose Local Option Sales Tax to be voted on July 31. Davis, in the April 5 edition of The Oconee Enterprise, wrote that “It is my belief that this 1-cent additional sales tax will be a wise investment and improve our transportation issues for the future.”

As is usual, the column also is on the county’s web site, under the heading “County Talk.”

County Public Works Director Emil Beshara said he “would not push one way or the other” on the tax. He made that comment when he met with the Citizen Advisory Committee on Land Use and Transportation Planning at its regular meeting on April 10.

Commissioner Chuck Horton told the Committee that Beshara only can serve as a resource.

“You can’t use any tax dollars” to promote T-SPLOST, Horton said.

The Oconee County Chamber of Commerce also is not taking a side, at least at present.

“Our stance is that we are going to educate our people,” J.R. Whitfield, president of the Chamber told me in a telephone conversation on April 12,

Whitfield said that the chamber has a committee studying the tax, and it may or may not recommend that the Chamber take a stand on the tax.

Whitfield said he was misquoted in the April 12 edition of the Enterprise saying the Chamber would support the tax.

If Oconee County voters join with voters in 11 others counties in the region in support of the tax on July 31, the local sales tax will increase by 1 cent on the dollar for 10 years to pay for a list of regional transportation projects. 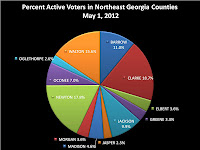 On the approved list of projects are seven in Oconee County, including the widening of Mars Hill Road and the creation of a multi-grade intersection for SR 316 and the Oconee Connector.

The Oconee County web site features a link on its home page to the list of projects from the web site of the Northeast Georgia Regional Commission.

Land Use and Transportation Planning Committee Chairman Abe Abouhamdan told the group on April 12 that it has been asked by the Board of Commissioners “to make recommendations” on how to improve “the understanding to the general public” of the T-SPLOST issues.

“What’s it about? Is it important?” Abouhamdan asked.

Beshara joined the discussion on April 12 to help answer those questions.

Beshara told the Land Use and Transportation Planning Committee that he expects the tax to generate $1 million or more each year for Oconee County to use for road work in the county in addition to funding the regional projects, such as the Mars Hill Road widening.

Beshara said the county doesn’t have enough money at present even to meet its local patching and resurfacing needs.

If the T-SPLOST initiative doesn’t pass, Horton told the group. “It goes back to the same way we’ve been doing.”

“Except we’ll do worse,” Beshara countered. He said this is true because the county will have to match 30 percent of project costs with the Georgia Department of Transportation rather than the current 10 percent.

Beshara said that if T-SPLOST doesn’t pass, the county also could lose funding for its big projects such as the Mars Hill Road widening, because GDOT will spend its money in the regions where the tax has passed.

Beshara said he would speak in favor of sales taxes generally.

“Use taxes are the fairest type of tax that there is,” he said, because the burden would be born both by county residents and those who do business in the county.

Davis, in his column in the Enterprise, said Oconee County “cannot afford to pay for” needed transportation improvements over the next 10 years without the revenue the T-SPLOST will produce.

“Our traffic congestion along Experiment Station/Mars Hill Road and the Oconee Connector will continue to be a problem,” he wrote.

Davis’ term as chairman of the Board of Commissioners expires at the end of the year. He has not announced if he will seek reelection.

Horton has announced he will seek the BOC chairmanship.

A majority of voters in the 12-county district must approve in the August 2012 referendum for the tax to go into effect.

The T-SPLOST initiative is the result of House Bill 277, called the Transportation Investment Action, passed by the General Assembly and signed into law by then-Gov. Sonny Perdue in 2010.

The final vote on the bill in the House was 141 in favor and 29 opposed.

McKillip is seeking reelection this year from the new 117th District, which includes three precincts from Oconee County.

Sen. Bill Cowsert, who represents Oconee County in the 46th District, voted for the bill.

The tax will apply to food and beverages, but it will not apply to fuel for motor vehicles or for off-road farm equipment. It also will not be placed on sale of jet fuel and the sale of energy for manufacturing.

If approved, the tax would start in 2013 and run for 10 years. At the end of that 10-year period, voters can be asked again if they want to renew the tax for another 10 years.

The money raised in the region will stay in the region, and the projects listed on the T-SPLOST referendum for that region will be the ones funded as the revenues from the tax are collected.

The sales tax was selected over an increase in the Georgia motor fuel tax in part because people are driving less and using more fuel efficient cars, making the existing tax an inadequate revenue source, according to the state web site created to explain the tax.

Oconee County voters will be overshadowed on July 31 by voters in Clarke, Walton and Newton counties, who together make up more than half the voters in the Northeast Georgia transportation district.

As of today, according to the Georgia Secretary of State records, 305,491 active voters are registered in the 12 counties that make up the tax district.

Of those, only 7.0 percent are in Oconee County.

At the April 10 meeting, several members of the Land Use and Transportation Planning Committee said the public needed additional information about T-SPLOST between now and July 31 if the county hopes for approval of the tax.

“The more people are educated, the more they will be willing to consider what is being asked,” committee member Courtney Gale said. “The automatic response is ‘I don’t want another tax.’”

Beshara’s said then that he was only allowed to provide information, not advocate for the tax.

The GDOT web site provides background on T-SPLOST, including the following assertions.

“Georgia spends less per capita on transportation than most other states.”

“While Georgia’s population and economy have grown rapidly, the state has under-invested in transportation infrastructure for years.”

Limitations on government spending to promote the tax are not explicit in Georgia law, according to BeLinda Godwin, director of education for the Georgia Government Transparency and Campaign Finance Commission, formerly known as the Georgia Ethics Commission.

I sent her an email message this morning asking her to tell me what regulations dictated what county officials can and cannot do to promote the T-SPLOST initiative.

I was not able to attend the April 10 meeting of the Land Use and Transportation Planning Committee. Russ Page made a video recording of the meeting for me. The video clip used in this posting comes from that recording.

I have a wealth of information for you relative to Oconee County T SPLOST projects and the law itself.
Thank you