Oconee County water and sewer customers will begin paying higher rates on July 1 as part of the budget passed by the Oconee County Board of Commissioners last Tuesday. 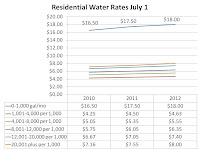 These are the rate increases requested by Utility Department Director Chris Thomas back in March and are part of the $7.3 million budget approved for his department on Tuesday. That figure is up 2.1 percent from last year.

Relatively small numbers of residential customers pay the base rate, since it provides for only up to 1,000 gallons per month of water. The rates for water purchased above the basic rate also will increase.

Those rates are scaled based on the amount of water used. A customer will pay $4.63 for each additional 1,000 gallons of water up to 8,000 gallons. That is an increase from $4.50 at present.

Rates in each of the higher use categories will increase as well. (Double click on the chart to enlarge it.)

The BOC has approved water rate increases every year since 2008, but the categories used to compute rates have changed over the years. They have been consistent since 2010.

Those who use 1,000 gallons per month or less are labeled “Super Conservers,” and their base rate will be reduced by $1, as is the case at present. 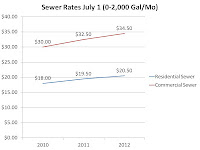 The base rate for up to 1,000 gallons of water served by a 1 inch meter will go up to $28.75 from $28 today. Most users are nonresidential. That is an increase of 2.7 percent. Rates for all of the other meter sizes also will increase.

The base rate for commercial sewer customers, who make up the vast majority of the Oconee County customers, will increase to $34.50 from $32.55, or by 6.0 percent. (Double click on the chart to enlarge it.)

The new water and sewer rates where increased when the BOC on Tuesday approved a $36.4 million budget for the county for fiscal year 2013, which begins on July 1.

The Utility Department budget is 19.9 percent of that total.

The total budget is up 0.9 percent from the current budget for the county and is balanced without an increase in the millage rate, despite drops in property values in the county. The BOC also did not use reserve funds.

The county will draw more heavily on Special Purpose Local Option Sales Tax revenues this coming year than it did for the current fiscal year.

County Budget Director Jeff Benko also is projecting higher sales tax revenues in the coming year than in the past, based on current trends.

The BOC voted to approve the new budget on Tuesday, ahead of the required passage by the end of the month.

Benko gave a presentation of the highlights of the budget at the meeting, but he did not mention any rate increases.

He did summarize those increases in response to a request I made during the public hearing before the final vote.

The budget includes only a few increases for the Parks and Recreation Department, which had increased fees significantly a year ago.

Thomas told the Board during budget hearings back in March that he needed the rate increases because of increased operating costs.

The budget he submitted projects an increase of 13.3 percent in the cost of supplies. That is higher than the increase in consumer prices, estimated to be about 3.2 percent in 2011 and at 2.3 percent for April, the most recent month for which data have been released.

It shows an increase of 2.1 percent in debt service.

Included is an increase of 5.1 percent in debt service for bonds for Hard Labor Creek, the reservoir project in Walton County. The two counties are partners on the project and are seeking state funds to build the dam.

The counties do not have funds to build the water treatment plant and distribution lines once the dam is built. They also do not have customers for the water.

The payment of $936,263 Oconee County will make on the Hard Labor Creek bonds is for interest. No payments against principal are included in the budget.

Payments on interest and principal for the Bear Creek reservoir in Jackson County actually will drop slightly in the 2013 budget compared with the current budget.

Payments on bonds issued in 2003 for water projects also will be stable.

Payments on bonds issued in 2009 for water and sewer projects will increase by 3.7 percent in the new year.

Something tells me that this is a major potential boondoogle which will cost taxpayers hundreds of thousands more, if not millions, then what we were first told.

Well, what Melvin wants, Melvin gets. He'll be out of office by the time the heavy bills start trickling in.