Oconee County voters could go to bed tomorrow night having elected a new sheriff, a majority female Board of Commissioners and a new chairman, a Board of Education chairman who knows the schools but has never been on the Board itself, a tax commissioner with legal experience but no experience in the tax commissioner office, and a woman to represent part of the county in the General Assembly.

And they could have added an additional 1 percent sales tax to the 7 percent sales tax they already pay as part of a proposal to improve regional transportation, including interchanges on SR 316. Between a third and a half of the likely voters already have cast their ballots, mostly in the Republican primary, where all the competition exists. 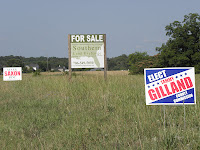 Those who haven’t certainly have motivation to turn out between 7 a.m. and 7 p.m. tomorrow to bring about change, mitigate change, or prevent it.

Clearly Tuesday’s election has the potential to alter political life in Oconee County.

Trey Downs has run an aggressive campaign against incumbent Sheriff Scott Berry, elected to his position in 1992, and it is unlikely anyone driving a road in the county has not seen a Downs yard sign or billboard.

Downs is a detective in the Snellville Police Department.

If educator Sarah Bell defeats incumbent Board of Commissioner Post 1 member Jim Luke and if University of Georgia administrator Tammy Gilland defeats retired Army Sgt. Maj. Mark Saxon, both seeking vacant Post 4 on the BOC, the five-person commission would have a female majority.

Margaret Hale, the lone woman on the Commission in recent years, is not up for reelection, her term expiring in two years. Commissioner John Daniell also has two years to run in his term.

Melvin Davis has been Chairman of the Board of Commissioners since 2000. Bell came within 100 votes of unseating him four years ago. This year, Chuck Horton, currently Post 4 commissioner, is trying to end Davis’ term as chairman.

David Weeks decided not to seek reelection to the Board of Education chairmanship, and Vice-Chair Mike Hunter chose to vacate Post 4 and seek the chairmanship. Hunter has argued that his experience is key.

Tom Odom actually filed for the chairmanship the day before Hunter did, and he has argued that his in-school experience qualifies him to provide leadership on the Board. He is a retired school principal.

Wayne Bagley, appointed to a vacancy on the BOE, is unopposed for Post 5. Mike Burnette, turned down in his application for that same opening, is unchallenged for Post 4, now held by Hunter.

Kim Argo and Mark Thomas have two years running on their terms.

Jennifer Riddle, who has served as deputy tax commissioner since 1999, decided to seek the office when Tax Commissioner Harriette Browning decided to retire.

Pamela Lohr Hendrix, a lawyer with experience in tax and other areas, has decided to challenge Riddle, arguing that a new perspective would serve the citizens well.

The most hotly contested race involves only three of the county’s 13 precincts: Bogart, Malcom Bridge and Athens Academy.

As a result of redistricting, Oconee County was split into two districts last year, with incumbent Doug McKillip, an Athens attorney, adding the three Oconee precincts to parts of Barrow, Jackson and Clarke County to form his new district.

McKillip won his seat two years ago as a Democrat and then switched to become a Republican.

Regina Quick, who ran against McKillip as a Republican in 2006, also is an attorney.

The pair has traded barbs over which is the more Republican and which is the more conservative, among other things. In the candidate forums held in the county, they have not given the impression that they like each other very much.

Those forums are available on the Vimeo Site of Oconee County Observations.

Were she elected, Quick would change the gender mix of the local delegation.

The Transportation Special Purpose Local Option Sales Tax vote is the legislature’s way of putting the burden for increased taxes for transportation infrastructure before the voters themselves.

Oconee County is part of a 12-county district that would have to approve the tax as a district for it to go into effect in January. If approved, the tax would run for 10 years.

How much change Oconee County voters want will be known tomorrow night. Results will start to be released by 8 p.m. on the county web site and at the courthouse itself.

The courthouse will open at 6 p.m. for those who want to watch returns there.

Come Wednesday morning, robo calls should have come to an end. Mailboxes will contain fewer fliers making charges and counter-charges. And yard signs will start to come down.