Romney Bested McCain Record In Percentage and Number of Votes, Despite Low Turnout In Oconee County

Darwin Did Well Too

NOTE: The Georgia Secretary of State's Election Division released updated results for Oconee County at 12:56 p.m. today (Nov. 12, 2012) and updated results for the state as a whole at 4:46 p.m. I have revised the chart and all of the text below to reflect these new results. These new data changed the interpretation of the lower turnout rate, and that change is reflected below as well. Lee

Mitt Romney got 13,098 votes in Tuesday’s election in Oconee County, which is 978 more votes than John McCain received in the county four years ago.

Barack Obama finished with 4,421 votes, which is 404 fewer than he obtained in the county four years earlier. 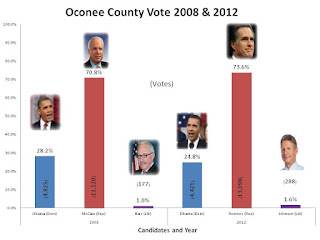 Romney even beat George W. Bush’s 2004 figure of 72.5 percent, and Romney’s percentage was the highest achieved by a Republican presidential candidate in the county going back to at least 1992.

On Tuesday, only 80.0 percent of the voters went to the polls, compared with 84.4 percent four years earlier.

Oconee County, with its 73.6 percent vote total for Romney on Tuesday, ranked 42nd out of Georgia’s 159 counties in terms of the percent voting for Romney.

The vote in Clarke County was 34.4 percent for Romney. Only seven counties gave Romney a lower percentage.

Obama did best in the state in and around Atlanta, in Athens/Clarke County, in Chatham and Liberty counties on the coast, and in the belt from Augusta to Columbus and Albany, including Bibb County and Macon.

Oconee County voters decided against Amendment 1, which gives the state more control over charter schools, with 52.0 percent opposed and 48.0 percent in favor.

In the state as a whole, 58.6 percent favored the amendment, while 41.4 percent opposed.

Oconee County ranked 98 out of 159 counties in its level of support for the amendment. Clarke County, with 45.8 percent voting in support, was ranked 112 in terms of support.

Better Match with Other State Votes

The majority of Oconee County voters (65.5 percent) supported Amendment 2, which allowed the state to sign multiple year leases. This was a little higher than the state figure of 63.8 percent.

Oconee County voters gave a higher percentage of their vote (73.0 percent) to Republican Chuck Eaton for public service commissioner than did voters around the state (52.1 percent). Eaton is the incumbent.

The other races on the Oconee County ballot were uncontested, and many voters passed over them.

While 17,807 votes were cast in the presidential race, none of the local races got more than 14,724 votes. That figure was achieved by Angela Watson, running unopposed for Superior Court Clerk.

Congressman Paul Broun got only 13,132 votes. A total of 1,480 voters wrote in another name on the ballot, with Charles Darwin getting 908 votes and Pete McCommons or Pete McCommunist getting 20 votes.

Critics of Broun’s statements about evolution offered Darwin as an alternative. McCommons, the publisher of Flagpole, the alternative weekly in Athens, had proposed Pete McCommunist, a fictitious person, as another alternative.

A common write-on was some variant of “Anyone else.”

Carole Amos, deputy registrar with the Oconee County Board of Elections and Registration, gave me on Friday the complete list of write-in votes for all of the offices on the ballot.

Romney’s poorest showing was in City Hall Precinct in Watkinsville, where he got 63.7 percent of the vote. His next weakest performance was in Annex Precinct (69.5 percent) and Athens Academy, with 69.6 percent.

The largest No vote on Amendment 1 came from Farmington, where 57.8 percent of the voters opposed the amendment.

Bogart (47.3 percent) and Athens Academy (48.8 percent) were least opposed to the amendment.

Thanks for your detailed and always-valuable reporting!

I agree. Thank you for doing this. The local papers don't seem to be close to being able to do what you do.

Well done Lee, now when are you going to run for office?

Lee, I want to join the others in thanking you for the reports you provide us. This is a lot of work on your part, and it so contributes to the citizenship of all of us.