The Oconee County Code Enforcement Office has issued building permits for about 260,000 square feet of space in Epps Bridge Centre, accounting for more than 60 percent of the core of the shopping center.

The county also has under review site plans for one of the 12 outparcels for the mall. Those site plans must be reviewed by the county’s Development Review Committee before the Code Enforcement Office can issue a building permit.

The $76 million shopping center is under construction between SR Loop 10, Epps Bridge Parkway and the Oconee Connector.

The Georgia Theatre Company plans to open the 16-screen University 16 Stadium Theatre by Memorial Day of 2013. The county issued the first building permit for that project on Oct. 10 of 2012, and construction of the building is easily visible from the Oconee Connector.

The Code Enforcement Office issued permits on Jan. 18 for the shell of a 50,016-square-foot building to house Dick’s Sporting Goods and the shell for three connected buildings totaling 27,000 square feet. These four buildings together make up Building 100.

The three buildings will house Ulta, Five Below and Pier 1 Imports, according to Utility Department records.

Ulta is a cosmetics, fragrance and beauty products shop. The closest store is at the Mall of Georgia in Buford. Corporate offices are in Bolingbrook, Ill., west of Chicago.

Five Below sells cosmetics, electronics accessories, toys and arts and crafts targeted at the teen and pre-teen market. All merchandise is priced at $1 to $5. The company is based in Philadelphia, and the closest store is at Buford’s Marketplace at Millcreek.

Pier 1 Imports currently has a store on the Atlanta Highway across from the Georgia Square Mall. The home decor company is headquartered in Fort Worth.

Also on Jan. 11, the county issued a building permit for another building, Building 600, without an identified tenant.

Utility Department records indicate that clothing retailers, Gap, Old Navy, Banana Republic and The Children’s Place will have stores in that building.

Gap, Old Navy and Banana Republic are divisions of Gap Inc., with headquarters in San Francisco. The Children’s Place is headquartered in Secaucus, N.J.

Gap and The Children’s Place have stores in Georgia Square Mall. Old Navy has a store in Athens Promenade on Atlanta Highway.

Those existing stores as well as Pier 1 Imports are just a little more than 2 miles from the Epps Bridge Centre. Retailers usually do not have competing stores in such proximity, making it unlikely these four retailers will retain their existing sites in Athens-Clarke County when the Oconee shopping center opens.

On Dec. 19, the county issued a building permit for PetSmart, a pet supply and pet services retailer.

The core of the shopping center consists of six building clusters and the theater. The theater sits at the back of the core, with building 300 to the west and building 100 to the east. The theater is labeled building 200 on the site plans. 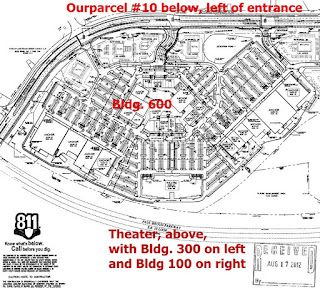 Developer 316 Associates of Atlanta listed building sizes on preliminary site plans submitted to the county in August, but the building permits show subsequent modifications in those plans. The theater, for example, was shown at 60,000 square feet, rather than the 70,412 square feet reflected in the actual building permit.

So far Dick’s Sporting Goods has the largest space in the mall, except for the building for the theater.

The developer could choose to sell the outparcels to an interested company. 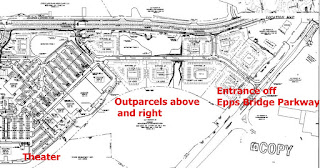 The Utility Department informed the Code Enforcement Office in the middle of last month that the 11 stores identified in this posting had paid water and sewer fees, making it possible for code enforcement to issue building permits.

The fees previously had been paid for the theater.

These records provide the most concrete information on tenants.

No tenants have been listed for Outparcel #10, a three-quarter acre tract between the shopping center core and the Oconee Connector. The preliminary site plan submitted by 316 Associates for review shows a 5,500-square-foot building divided into two retail stores.

The core shopping center site plan was approved by the Development Review Committee on Oct. 21, 2011, making it possible for Code Enforcement to issue building permits. DRC review is still needed for the outparcels.

The Development Review Committee is made up of representatives from the Planning Department, the Public Works Department, Code Enforcement, the Environmental Health Services, the Utility Department, and the Emergency Management Agency and Fire Department.

All of the pictures used here were taken today.

NOTE: An earlier version of this story said Dick's Sporting Goods did not have stores in the area. I relied on the company's store locator to find stores. I should have backed this up with a web search. I apologize for the error and thank the two persons who sent a comment correcting me.

Plenty of folks are paying attention to the county. This is a good mix of growth, planning, good old "tax base enhancement," convenience, etc, with the expectation of limitation of southern creep.

Dick's currently has locations at the Mall of Georgia and in Loganville.

Dick's currently has a location at the Mall of Georgia and in Loganville.

yea golden corral would be nice.

Dick's sporting goods still doesnt show up in the store locator. I would like to apply there.