Oconee County residents are most concerned about economic issues facing the county, including the need for economic development and for growth in employments prospects, according to a scientific survey of registered voters conducted just before the elections last November.

One in five of those responding to the survey said they don’t think the county has any problems or were unable to identify a problem in response to a question asking them to name “the most important problem facing Oconee County.”

The survey was conducted from Oct. 17 to Nov. 2 with 188 registered voters selected by chance from the Oconee County voter registration list. Students in a graduate social science research methods class conducted the interviews, mostly by telephone.

The students were enrolled in a class I teach in the Grady College of Journalism and Mass Communication at the University of Georgia. The students conduct a survey in the class to learn about survey techniques.

Strictly speaking, the survey findings only apply to registered voters. Oconee County has a very high rate of registration, however, suggesting that the results would apply with only minor adjustments to the population of persons 18 years old and older in the county.

The findings also are dated, but no major issues have arisen in the county since last fall and the local and national economies have not changed markedly. It is unlikely responses to the question on the county’s most important problem would be very different today.

The survey also found that the vast majority of Oconee County voters think Epps Bridge Centre, the major new shopping center under construction on Epps Bridge Parkway, is a good development for the county.

The respondents happy with the center cited increased tax revenue and jobs as the reason, and some mentioned better shopping options. Those opposed cited traffic and environmental concerns.

These were the only two questions on the survey, which took about 15 minutes to complete, that dealt explicitly with Oconee County. Students selected most of the questions they asked from national surveys that dealt with political and social issues broadly.

Respondents answered the question on the most important problem facing Oconee County in their own words. I looked for commonalities and classified responses into broad categories. 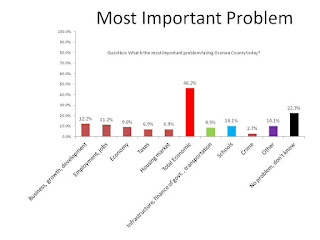 One respondent said the most important problem was “Growth in the county. I want it to be the right kind.”

“Jobs–creating more of them,” one voter said.

“I really hate that there are so many subdivisions with huge, cheaply-built homes that are just sitting completely empty,” another respondent said.

Infrastructure Issue For Some

An additional 8.5 percent of the respondents mentioned infrastructural problems such as roads, water and financing of government.

One in 10 of the respondents (10.1 percent) listed problems with the schools, and 2.7 percent listed crime. (Click on the chart to enlarge it.)

One respondent said the most important problem was the “challenge to continue with excellence in education,” while another said the problem was the “high school graduation rate. We need better schools for our children.”

Some Responses Hard To Classify

Some responses just did not fit easily into categories.

One respondent said the biggest problem was “The possibility of the Presbyterian Village opening up.” Another said: “Attitudes of the people toward people who are different.” Another called for a “greater presence of Jesus.”

I classified these as “other” responses in the chart.

The survey results can be expected to match those of the whole population of Oconee County voters within plus or minus 7.1 percentage points. The odds are 19 to 1, for example, that the percentage of voters in Oconee County listing some sort of economic problem as the major problem facing the county is between 39.1 and 53.3 percent.

Three-quarters (76.6 percent) of the respondents said the new shopping mall, Epps Bridge Centre, is a good thing for the county. Only about one in ten (12.8 percent) said it was not. 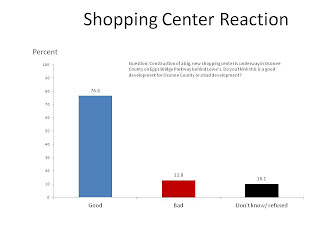 “Sounds like progress to me,” one voter said. “It’s growth and we need that.”

“Taxes will come here,” another said.

“We need more upscale businesses,” another respondent said. “Our current shopping center is a joke.”

“We don’t need Hooters or movie theaters,” a critic said.

Another critic said: “They just wiped out so many acres of trees, just to put in more big box buildings and pavement.”

The questions asked of the respondents were relatively straightforward, but evidence shows that slight changes in question wording can sometimes produce differences in survey responses. (The questions asked are shown in the charts.)

In conducting the survey, the students selected 760 registered voters randomly, that is, by chance, from the 23,899 registered votes on Sept. 29, 2012. Voter lists contain names and addresses, and the students looked for telephone numbers and email addresses using online directories.

In the end, students completed interviews with 24.7 percent of those 760 selected registered voters.

The close match of the sample with the population on these known characteristics does not guarantee that a match would exist between how respondents answered the survey questions and how all voters would have responded had they been interviewed, though it suggests that would have been the case.