All five of these projects were included in the budget request Parks and Recreation Department Director John Gentry made to the Board of Commissioners in February, but the Commissioners added $35,000 to the budget after the county learned in March that it had not received federal funds for the walking trail extension.

Gentry told the Commissioners when he submitted the application for federal funds that residents ask him nearly daily about completion of the walking trail.

The funding approved by the BOC will add about three-quarters of a mile to the existing 1.8 miles of the paved trail, making a complete loop and extending the trail into the northern part of the park.

Total SPLOST funding for the current fiscal year was set at just less than $5.5 million, but much of that money will be used for water and sewer projects, for road paving and repair, and to pay off county debt.

Included is nearly $0.9 million for payment of the debt on bonds for purchase of the land for and construction of Veterans Park.

The projects at the county’s parks are the most visible use of SPLOST funds in the FY 2014 budget, Oconee County Finance Director Wes Geddings told me when we talked by telephone last week. 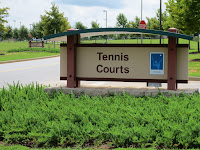 The protective net at Veterans Park is budgeted at $50,000. The restroom at Bogart Sports Complex is expected to cost $60,000. The recoating of the tennis courts at Veterans park is listed at $25,000, and the public address systems are set to cost $25,000.

The current SPLOST started in calendar year 2010 and will run for six years, ending in December of 2016.

Parks and Recreation Director Gentry told me when we spoke by phone on Wednesday that his best estimate is that construction on the walking trail will start in October and be completed by the middle of November.

Weather will determine if that is possible, he said. If the temperature is too cold for paving in October, the project could be delayed until March, he said.

Gentry said he has to coordinate the project with the Public Works Department, which will contribute equipment and personnel.

The Parks and Recreation Department will pay fuel and material costs to cover the Public Works Department contribution to the project, Gentry said.

Gentry had estimated the total cost of the project at $85,000 when he submitted his bid for federal funding in November of 2012.

The county learned on March 14 of this year that its application for a Georgia Recreational Trails Program grant had not been approved for funding.

The DNR had only $1.6 million in federal funding for the competition.

In the application, Gentry told the DNR that the current trail dead ends in part because of a lack of funding for its extension.

The BOC had authorized Gentry to list $17,000 in SPLOST funds as a match for those federal funds.

At present, the pavement for the trail turns and then ends abruptly and is blocked with orange barrels. The extension will not follow the direction of the current trail stub.

Instead, it will run along the edge of the park to the east of the area set aside for future ball fields, circle a pond, and return to join the exiting trail behind the community center.

Most of the area already has been cleared.

The proposal for the pre-cast restroom at Bogart Sports Complex includes a linkage to the county sewer system.

At present, according to Utility Department Director Chris Thomas, Bogart is not served by residential sewers.

Thomas said in a telephone conversation on Friday that one option being explored is connection to a sewer line and lift station already constructed but not yet in use. The Bogart Library also then could be connected to county sewers, he said.

The 33-acre Bogart Sports Complex is located behind the Bogart Library at 200 South Burson/Thompson Street. It includes baseball and multipurpose fields, a half-mile, paved walking trail, a picnic pavilion and playgrounds.