Oconee County voters seem to have softened their opposition to alcohol sales, according to a scientific survey of registered voters conducted in the county in the last two weeks of October.

Only about one in four want to keep the current restriction on Sunday sales of beer and wine in the county.

About the same ratio want to continue the current ban on sale of alcohol by the drink.

The sale of beer and wine in county restaurants, approved by the Board of Commissioners in 2008, has had no adverse effect, a proponent of liquor by the drink said in explaining the answer.

The sales of liquor by the drink would “allow Oconee County restaurants to be able to better compete with Athens’ restaurants,” the survey respondent said.

“I'm a Christian,” an opponent of the change said. “I believe you should keep the Lord's day holy.”

Oconee County voters turned down liquor by the drink most recently in 2002. It had been rejected by voters twice before. 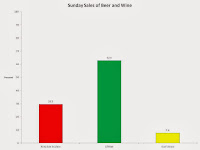 The state legislature in 2011 allowed cities and counties in the state to vote on Sunday sales of beer and wine in groceries and other such outlets, but Oconee County Commissioners have never put it on the ballot.

Athens-Clarke County does allow Sunday package sales and liquor by the drink.

Students in a graduate research methods class I teach at the University of Georgia conducted the survey, under my direction. The project is designed to help students learn about scientific surveys and data analysis.

The students drew a simple random sample from the county’s list of 24,689 registered voters, which I purchased from the Secretary of State office on Sept. 15. 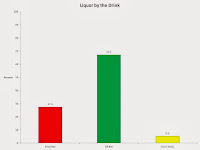 The students completed interviews with 210 of the 759 names drawn for the sample, or 27.7 percent.

The characteristics of those interviewed closely matched those of registered voters in terms of gender, racial classification, age, precinct of registration and zip code.

The margin of error for the survey is a relatively large 6.8 percent, reflecting the small number of voters interviewed. The error term signifies that the odds are 19 to 1 that the responses from the sample would reflect within plus or minus 6.8 percent those of registered voters in the county had all voters been interviewed.

The students completed 60.0 percent of the interviews over the telephone, with the remainder completed in person, through the mail, or online.

The survey took about 15 minutes to complete and included questions on a variety of national topics.

The students did not ask respondents how they would vote, but rather if they would favor continuing bans on alcohol sales or favor lifting those bans. 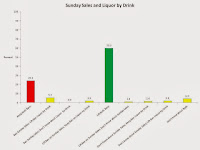 The exact question asked about Sunday sales was:

“Oconee County has a ban on the sale of beer and wine in retail stores on Sundays, while some cities and counties, including Athens-Clarke County, have lifted such bans. Do you favor the existing ban on Sunday beer and wine sale in Oconee County or would you like to see that ban lifted?”

The question on liquor by the drink was:

“Oconee County also does not allow the sale of liquor (including cocktails, whiskey, etcetera) by the drink in restaurants on Sundays. Do you think this ban should remain or should the ban be lifted?

In each case, the question was followed by a probe asking the respondent why she or he held the position articulated.

It isn’t possible to know how these responses would be translated to actual vote, both because of the question asked and because turnout varies across elections.

It is at least theoretically possible that a majority of voters in the past have supported alcohol sales but that majority did not show up at the polls.

Rumblings On Liquor By Drink

Despite the disadvantage that area grocery stores, including those on Epps Bridge Parkway, suffer in competition with similar stores nearby in Athens-Clarke County because of the ban on Sunday package sales, the issue has not surfaced in the county.

Liquor by the drink, on the other hand, has been discussed.

Commissioner John Daniell told me in a telephone conversation on Dec. 16 that Commissioners recently “have gotten a couple of letters” asking them to put alcohol by the drink on the ballot.

Daniell said his position is that anyone who wants the issue on the ballot should do so by petition, as is allowed by law, rather than by getting approval of the Board of Commissioners.

Daniell said he would not vote to put the issue on the ballot.

The student survey found that 62.9 percent of the registered voters interviewed want to allow the sale of beer and wine in retail stores on Sundays, while only 29.5 percent said they oppose such sales.

The survey found that 67.1 percent of the registered voters want to allow the sale of liquor by the drink, and only 27.5 percent are opposed.

Nearly 60 percent (59.9 percent) favor lifting both bans, meaning that, even with the margin of error in the survey, more than half of the voters favor these changes in the county’s laws.

The expected response, given the error, is between 53.1 percent and 66.7 percent in favor of lifting the restrictions.

Click on the three charts above to enlarge them.

Support for selling beer and wine on Sunday and for selling liquor by the drink is strong across segments of registered voters, though differences do exist.

Males are more supportive of alcohol sales than women, with 68.4 percent of the former favoring Sunday package sales while 59.5 percent of the latter favor Sunday sales.

The younger are more supportive of alcohol sales than the older voters.

Those who say they are conservative are less supportive than those who label themselves as liberal.

What are the requirements for a successful petition?

This is going to come to a head soon. National restaurant chains will not come to Epps Bridge if they can't serve mixed drinks. Their profit margin on mixed drinks like margaritas is very high. The owner of Epps Bridge is going to push Melvin and the commission on this. It will be very interesting to see who brings this up publicly.

I am sorry to be slow in answering the question about a petition. The law says that a written petition containing "signatures of at least 35 percent of the registered and qualified voters" are required to obtain the referendum. The number of registered voters in September was 24,689. That number varies, but 35 percent of that figure is 8,642.